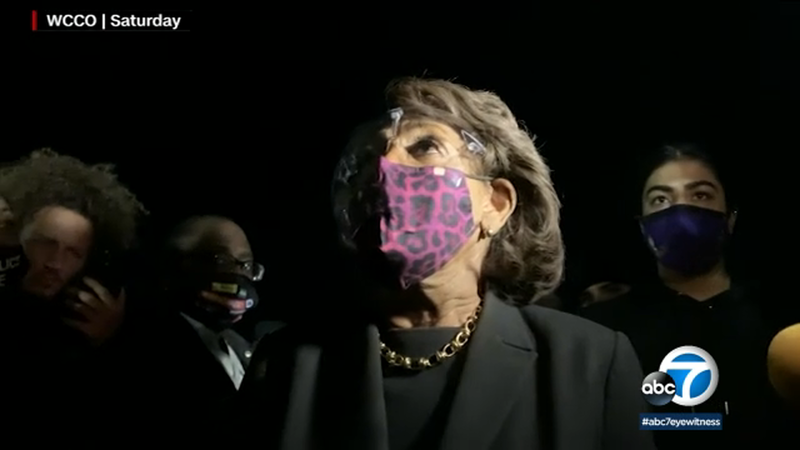 MINNEAPOLIS -- The judge overseeing the trial of a former Minneapolis police officer in the death of George Floyd on Monday called recent comments by U.S. Rep. Maxine Waters "abhorrent," saying they could lead to a verdict being appealed and overturned.

Waters, a California Democrat, had joined protesters on Saturday outside the police department of a Minneapolis suburb where a police officer fatally shot a Black motorist earlier this month. Waters, who is Black, told the crowd she wanted to see a murder conviction against Derek Chauvin for Floyd's death.

Minneapolis is on edge as it anticipates the outcome of Chauvin's trial and reels from the death of 20-year-old Daunte Wright in Brooklyn Center.

L.A.'s top law enforcement officials said they are ready to call on the National Guard for help as they brace for protests over the upcoming verdict in the trial of former officer Derek Chauvin, charged in the death of George Floyd.

Judge Peter Cahill showed frustration with Waters' rhetoric shortly after the jury was dismissed Monday to begin deliberations. Chauvin's defense attorney had motioned for a mistrial in light of Waters' comments. Cahill denied the motion but called it "disrespectful to the rule of law and to the judicial branch" for elected officials to comment on the outcome of the case.

"Their failure to do so, I think, is abhorrent, he said. "But I don't think it has prejudiced us with additional material that would prejudice this jury. They have been told not to watch the news. I trust they are following those instructions."

A spokesman for Waters didn't immediately respond to a message seeking comment.

Conservatives have seized on Waters' comments, saying she is inflaming tensions as Minneapolis looks to prevent looting and destruction that occurred after Floyd's death last year.

White House press secretary Jen Psaki was asked at Monday's daily White House briefing if Biden agrees with Waters' comment, but she attempted to tamp down the president's stance.

"He recognizes the issue of police violence against people of color, communities of color is one of great anguish, and it's exhausting and quite emotional at times," she said, adding, "But as he also always says, protests must be peaceful. That's what he continues to call for."

Waters has been a galvanizing figure for decades, visiting communities nationwide to advocate for racial and economic justice, and an end to police violence.

It's no surprise she would appear in Minnesota. She began focusing on policing issues in 1979 after the police shooting of a Black woman during a confrontation in Los Angeles over an unpaid gas bill and was a leading voice advocate for policing changes in the aftermath of the videotaped beating of Black motorist Rodney King by LAPD officers.

Over three decades in Congress, the Los Angeles-area congresswoman has drawn criticism from Republicans and conservatives, who were quick to seize on her comments Monday.

The House Republican leader Kevin McCarthy said on Twitter that he was introducing a resolution to censure Waters "for these dangerous comments."

Senate Republican leader Mitch McConnell said in a speech that "it's harder to imagine anything more inappropriate than a member of Congress flying in from California to inform local leaders, not so subtly, that this defendant had better be found guilty."

Still, Waters has allies as a longstanding and senior member of Congress.

House Speaker Nancy Pelosi said Waters' comments should be viewed in the context of the long struggle toward civil rights.

"Maxine talked about confrontation in the manner of the Civil Rights movement," Pelosi told reporters at the Capitol.

Asked if Waters should apologize, Pelosi said no.

"I myself think we should take our lead from the George Floyd family. They've handled this with great dignity, and no ambiguity or lack of misinterpretation by the other side," Pelosi said.
Report a correction or typo
Related topics:
minnesotajudgegeorge floydpoliticsu.s. & world
Copyright © 2021 by The Associated Press. All Rights Reserved.
More Videos
From CNN Newsource affiliates
TOP STORIES