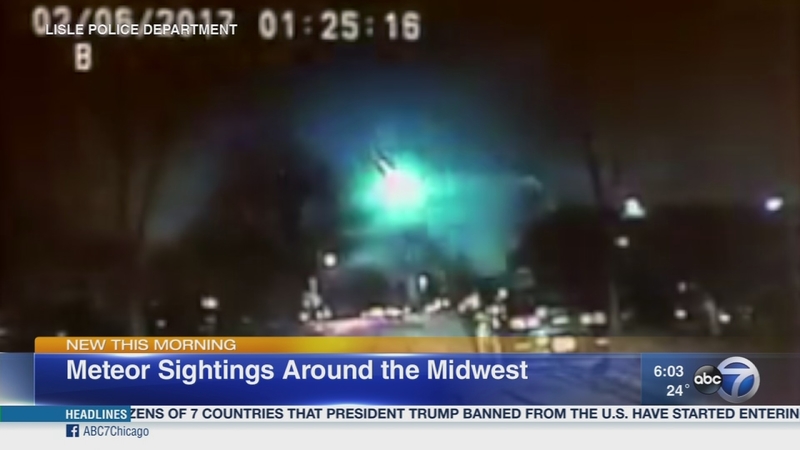 LISLE, Ill. -- While most people were sleeping, some sky watchers across the Chicago area and the Midwest got a glimpse of a meteor early Monday morning.

"I took a look at the north camera saw the meteor across right thru the sky it was pretty amazing," she said.


Thomas Pozarski works security for a company in Plover, Wisconsin, near Stevens Point. He was working a night shift, not his usual shift, when he spotted the green glow in the sky.

"Our overnight shift is pretty quiet, so, I wasn't doing a lot. I saw the big flash, I looked out the window and there is was," Pozarski said.


Video from the east camera on the roof of the Atmospheric, Oceanic and Space Sciences Building on the University of Wisconsin campus clearly shows the meteor glowing in the night sky.

The fireball was spotted on several dashcams from area police departments as well, including in Lisle.

Check out this INCREDIBLE video of the #meteor this morning as viewed from a Lisle, IL police car dash cam! Thanks to Lisle PD for sharing! pic.twitter.com/uYELKkBxRO

One officer spotted the meteor while out on patrol.

"Our officer was actually patrolling a bunch of the neighborhoods, when he came up on the street he actually was in perfect position to catch it as he put in car in park, all of a sudden the meteor came over from the rear of the vehicle to the front and he caught that on his dash cam video," said Lisle Deputy Police Chief Ron Wilke.