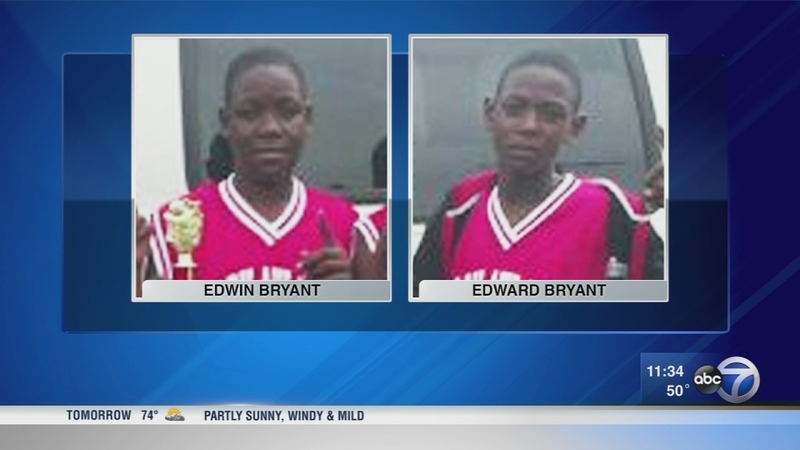 CHICAGO -- A violent weekend in Chicago left 17 people dead and 41 others wounded, according to Chicago police.

Among the victims were 17-year-old twin boys who were killed in a shooting Sunday morning in the Old Town neighborhood, police said.

Police said the brothers were standing outside on North Hudson Avenue at about 3:15 a.m. when a dark-colored vehicle drove by and someone inside opened fire, police said.

On Saturday night, two women were shot inside a popular restaurant in the Auburn Gresham neighborhood, police said.

A masked man opened fire inside the Jamaican Jerk Villa on West 79th Street at about 8:38 p.m, police said. Two women were shot, a customer and a worker. Both are expected to survive.

On Monday, 223 officers graduated from the police academy to help combat violence in the city. In addition to the new officers, 21 current officers were promoted to field officers.

"Every incidence, every encounter between a police officer and a resident of the city of Chicago is a learning experience. How they come away from that experience will determine how they view the police department," Mayor Rahm Emanuel told the graduates.

Superintendent Eddie Johnson said the shootings were mainly gang-related and although more resources were sent to Wrigleyville, other areas were still protected by police.

"It was a tough weekend, but it just goes back to what I have been saying all the time. Listen, until we start holding repeat gun offenders accountable for these crimes, we're going to keep seeing cycles of gun violence like this," he said.

Chicago police said 7,000 illegal handguns have been taken off the streets in 2016. Johnson hopes adding more officers will help curb the violence.

It is one of the largest graduating classes this year and one of the most diverse, part of the mayor's plan to expand the Chicago Police Department.

The weekend's latest homicide happened shortly after 4 a.m. Monday in the Englewood neighborhood on the South Side. A 28-year-old man was found with gunshot wounds to the chest and head on the kitchen floor of a second-floor apartment on West Garfield, according to Chicago police. He was pronounced dead at the scene. The Cook County Medical Examiner's Office did not immediately release his name.

A 19-year-old man was killed and a 40-year-old man was wounded in a Near West Side shooting. The men were in a car at 2:59 a.m. on West Jackson when someone walked up and fired shots in their direction, authorities said. The driver tried to speed away, but their vehicle struck a parked vehicle before coming to a rest. The 19-year-old suffered several gunshot wounds to the back and was taken to Stroger Hospital where he was pronounced dead at 3:38 a.m. The 40-year-old man was shot in the shoulder and also taken to Stroger, where his condition was stabilized.

At 2:34 a.m., a 24-year-old woman showed up on South Hoxie in the South Deering neighborhood on the Far South Side and told witnesses she was shot, police said. The woman had suffered a gunshot wound to the body and someone took her to Trinity Hospital, where she was pronounced dead, police said. The medical examiner's office has not yet released her name.

About 1 a.m., officers responded to a call of shots fired on South Vernon in the South Side Chatham neighborhood and found a man lying on the sidewalk, police said. The man, thought to be between 35 and 45 years old, was shot in the head and chest and pronounced dead at the scene at 1:19 a.m. He has not been identified.

Fifteen minutes earlier in the Humboldt Park neighborhood on the West Side, officers responding to a call of shots fired found a 31-year-old man on the sidewalk on West Hirsch, according to police. He suffered a gunshot wound to the face and was taken to Norwegian American Hospital, where he was pronounced dead. His name has not been released.

At 8:05 p.m. on Saturday, 19-year-old Luis Corona was shot to death in the Archer Heights neighborhood on the Southwest Side. He was in a parked vehicle on South Karlov when two males told him they were going to rob him, according to police and the medical examiner's office. Corona tried to escape, but was shot in the chest and crashed his vehicle into two parked vehicles at the end of an alley. Corona was pronounced dead at the scene at 8:25 p.m.

Less than an hour earlier, a 28-year-old man was sitting in a parked vehicle in an alley on South Hermitage in the South Side Gresham neighborhood when someone walked up and shot him in the head, police said. He was pronounced dead at the scene at 7:45 p.m., according to the medical examiner's office. His name has not yet been released.

About 20 minutes earlier, a 36-year-old man was shot in the Englewood neighborhood and died later Sunday morning. Walter McCurry was standing in the street at 7:23 p.m. on Saturday on West 57th Street, when someone in a dark-colored car fired shots, hitting him in the chest, arm and hip, authorities said. McCurry was taken to Stroger Hospital where he was pronounced dead at 3:47 a.m. on Sunday.

At 4:50 p.m., a 17-year-old boy was fatally shot in the West Garfield Park neighborhood, authorities said. He was discovered outside on South Kostner with gunshot wounds to his back and leg. The boy was taken to Mount Sinai Hospital, where he was pronounced dead at 5:14 p.m. His name has not been released.

At 1:23 a.m., a 14-year-old boy was gunned down in the West Side Austin neighborhood. DeMarco Webster Jr. was on South Central when someone in a dark-colored car shot him in the torso, authorities said. Webster was taken to Loyola University Medical Center in Maywood where he died at 3:15 a.m.

At 12:04 a.m. in the South Side Auburn Gresham neighborhood, someone walked up to 25-year-old Martell Turner as he sat in a vehicle on West 79th Street and shot him in the chest and abdomen, authorities said. Turner was taken to Christ Medical Center in Oak Lawn where he was pronounced dead at 1:31 a.m.

Five minutes before that in the South Shore neighborhood, officers responding to a call of a person shot found 30-year-old Tyrice Anderson in the street on South South Shore Drive, authorities said. Anderson was shot in the head and taken to Christ Medical Center where he was pronounced dead at 1:03 a.m.

About 10:20 p.m. on Friday, two people were gunned down at a Back of the Yards neighborhood gas station on the South Side. Chiquita Ford and Brian Fields, both 30 years old, were sitting in a vehicle at the station on West Garfield when a gunman walked up and fired at them, hitting the woman in the side and the man in the chest, authorities said. They were both pronounced dead at the scene at 11:02 p.m.
Related topics:
illinoischicago shootingmurdergang violencegun violencehomicideshootingu.s. & world
Copyright © 2022 WLS-TV. All Rights Reserved.
TOP STORIES
UPS driver, 24, collapses, dies in SoCal heat
New Glassell Park restaurant at center of gentrification debate
New California laws on bars, ghost guns, schools taking effect
14 suspects grab and run out with merchandise from Century City mall
4th of July fireworks in Southern California: Where to watch
Disneyland replacing Splash Mountain with Tiana's Bayou Adventure
Newsom adds restrictions on ghost guns, marketing firearms to minors
Show More
Man graduates LAPD academy at 45 after becoming US citizen
California first to cover health care for all immigrants
Free gas giveaway leads to massive traffic jam in Compton
Broken hydrant sends water geyser over Los Feliz intersection
California gas tax increase kicks in. What you need to know
More TOP STORIES News