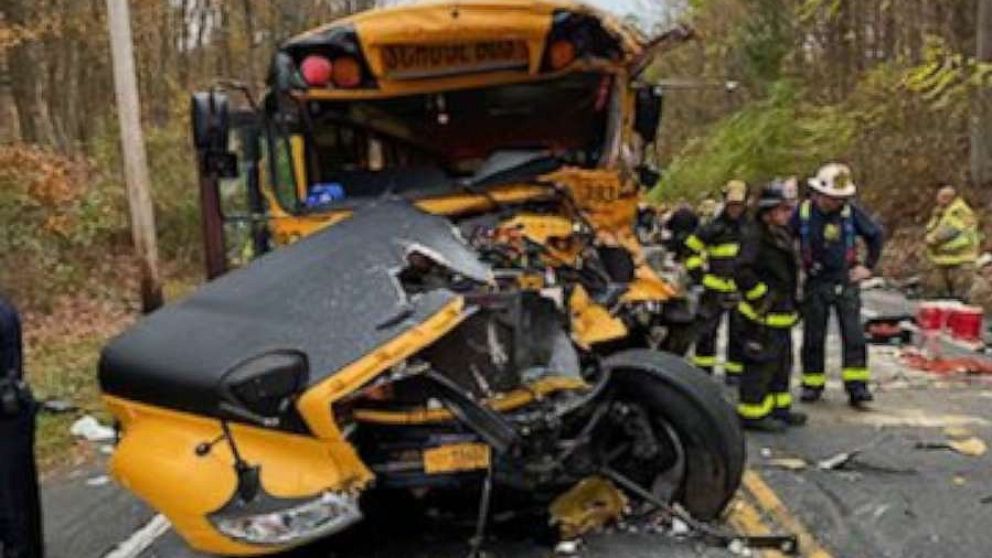 The crash occurred in New Windsor, Orange County, about 66 miles northeast of New York City, and authorities said at least three of the crash victims were taken to a hospital in critical condition and several others were treated for less serious injuries, according to police.

The bus involved in the crash was from the Little Britain Elementary School in New Windsor, according to the Washingtonville Central School District.

A preliminary investigation indicates a westbound truck, owned by a local tree-trimming service, crossed over the double yellow line and hit the eastbound school bus head on, the New Windsor Police Department said in a statement.

The accident is still under investigation.

The crash happened close to 8:30 a.m. on a two-lane section of Route 207, less than five miles from the Little Britain school, police said. Police said the bus slammed into a truck owned by a local tree trimming service.

Police said a third vehicle was also involved in the crash.

The front end of the school bus was badly damaged and its front windshield shattered, according to a photo from wreck.

The photo also appeared to show a trailer from a tree service company leaning against the rear of the bus and a damaged wood-chipping machine lying at the side of the road next to the bus.

New Windsor police said eight children were on the bus and a girl sitting behind the driver had to be extricated from the bus and was among those critically injured. All of the children were taken to St. Luke's Hospital in nearby Newburgh to be examined, police said, following school protocol and standards practices.

The bus driver and the driver of the tree trimming truck, whose names were not immediately released, were also hospitalized in critical condition, police said.

Local emergency services and district personnel reported quickly to the scene and all parents have been notified, according to officials.