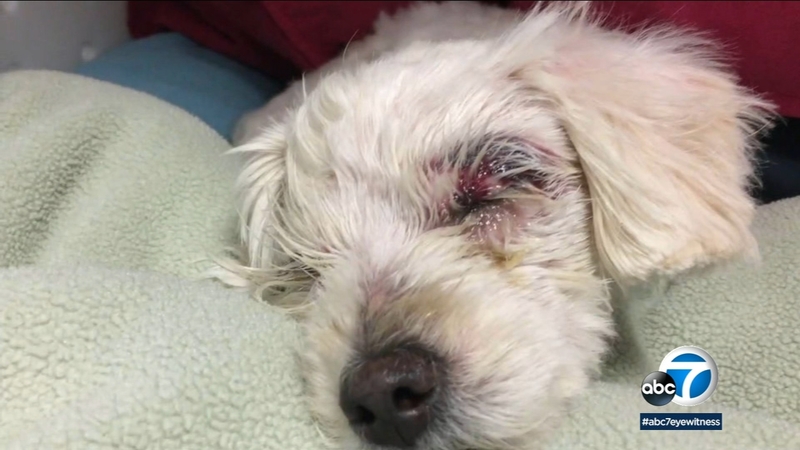 LONG BEACH, Calif. (KABC) -- A reward is being offered to find the person responsible for leaving a severely abused dog in a trash bin in Long Beach.

Her rescuers call her Chloe and said her condition is "guarded." She's come a long way compared to when the terrier-maltese-poodle mix was found in a tied-up trash bag. That bag was inside a dumpster northeast of downtown last Saturday.

"Chloe was in horrible shape. The smell coming off of her was unlike anything I can describe," said Diana Kliche, with Fix Long Beach Pets and Animals.

Rescuers with the nonprofit later learned she was covered in human urine. Chloe - believed to be 1 to 1 1/2 years old - suffered severe abuse.

"She has a skull fracture. They thought at the time she might have a broken neck and broken ribs. Her leg was snapped in half and she had bruises all down the side of her head," Kliche said.

She's undergone a CAT scan and doctors said they're concerned she may have a blood clot. She needs surgery to try and save her leg.

"I'm completely astounded and heartbroken that someone would do this to such an innocent little soul," Kliche said.

Rescuers and private donors also put up a reward of more than $12,000 in the hopes of tracking down the abuser.

"I'm hoping that by putting the reward out there that it gets the awareness out there and people take it serious," said Sherri Stankawitz, with Sparky and the Gang.

If you would like to donate, you may do so by using PayPal for the account donate@fixlongbeachpets.com.