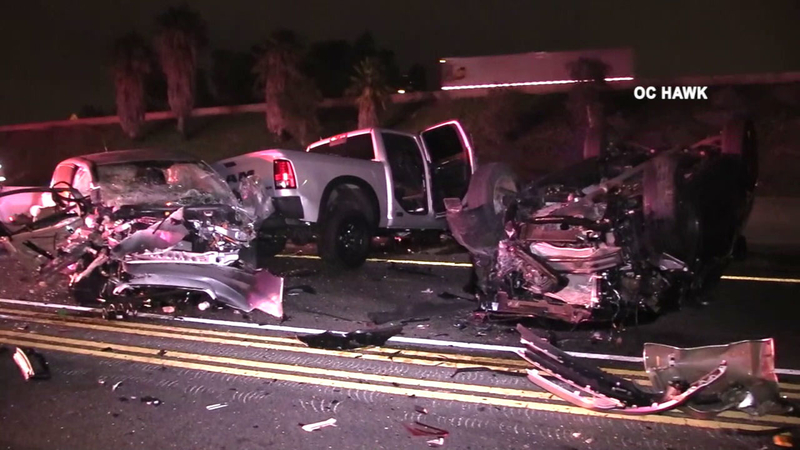 IRVINE, Calif. (KABC) -- A multi-vehicle crash on the 5 Freeway in Irvine on Thursday morning left one woman dead and nine other people hospitalized, authorities said. Three children were among the injured.

The pileup, involving nine vehicles, occurred about 1:30 a.m. and prompted the shutdown of all southbound lanes at Alton Parkway until noon, according to the California Highway Patrol.

Firefighters at the scene worked to extricate the deceased woman's body from her car. She was identified only as a 24-year-old woman from Chula Vista. A 6-month-old boy was among those taken to a trauma center after being rescued from that vehicle. Officials said he was found alive and still in his car seat.

A 10-year-old and 11-year-old were also hospitalized in unknown condition.

The 22-year-old driver of a gray Dodge Challenger, alleged to have initiated the chain-reaction collision, was arrested on suspicion of DUI. Authorities identified him as a Nevada resident but did not immediately disclose his name.

He was nearly unconscious and throwing up on the side of the highway. CHP officials said he was traveling in excess of 100 mph.

An on-duty Uber driver said his was the first vehicle to be hit by the suspect. There were no passengers in his Toyota Prius at the time.

"He was going about 90. I check my speedometer periodically -- I was going 60," the innocent driver said.

He added that 10 minutes went by before more cars piled in.

The Uber driver said that although he feels badly for the people harmed in the multi-car wreck, it could have been worse. He credited a tow truck driver who stopped and tried to slow down approaching drivers.

"I feel really grateful that somebody took the time to go by and help," he said.

While CHP officials described the young mother's death as a tragedy, they're thankful the 6-month-old boy survived.

"If you have a child, always have them in the car seat," Olivera said.