A CHP officer was struck by a vehicle while making a traffic stop Sunday on the 10 Freeway in San Gabriel. 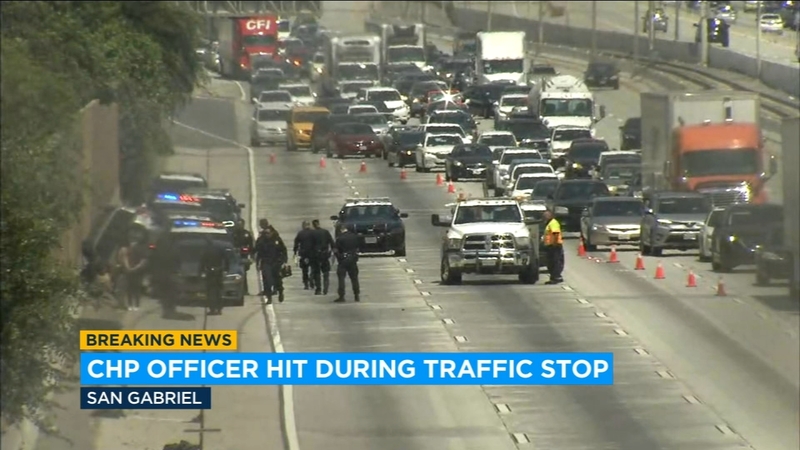 CHP officer struck by vehicle on 10 Freeway in San Gabriel

SAN GABRIEL, Calif. -- A CHP officer was struck by a vehicle and suffered major injuries while making a traffic stop Sunday on the 10 Freeway in San Gabriel.

The incident happened around 1:40 p.m on the westbound 10 at New Avenue in San Gabriel.

A driver in a Scion FRS made an "unsafe lane change" and cut off a 2008 Toyota Rav4, sparking multiple crashes, authorities said.

When the driver in the Toyota hit the brakes and swerved to the right in order to avoid colliding with the Scion, the driver lost control and hit the officer's Ford Police Interceptor Utility vehicle, which was parked on the right shoulder behind a 2013 BMW.

The force of the initial crash pushed the Ford forward, causing it to hit the BMW. The chain-reaction crash ended with the 30-year-old officer being struck.

The CHP officer's name was not known, but his injuries were described as major.

The officer was transported to a local hospital.

Several lanes on the freeway were closed during the investigation. A SigAlert was issued and expired shortly before 4 p.m.