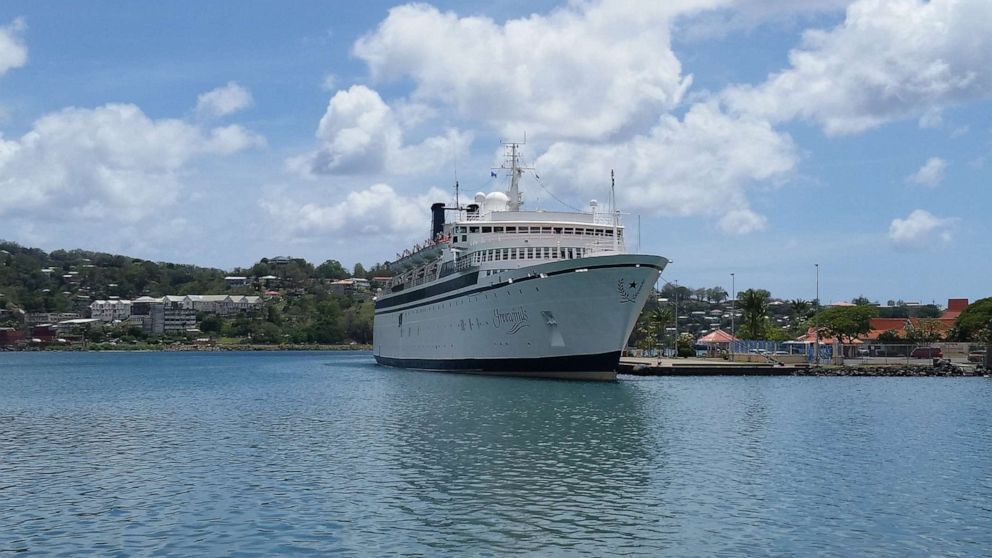 The cruise ship quarantined in St. Lucia because of a confirmed case of measles is the Freewinds, which belongs to the Church of Scientology, according to St. Lucia Marine Police.

The country's ministry of health said Thursday in a news release that the ship had entered the country's ports on Tuesday and confirmed the measles diagnosis aboard the ship.

The person diagnosed with the measles, as well as other crew and passengers, are "stable." They remain under surveillance by the ship's doctor, however, the health ministry said.

"Continued surveillance is necessary as the incubation period for measles ranges from 10 to 12 days, before symptoms in exposed persons occur," the health ministry said in its news release Thursday. "The ship's doctor requested 100 doses of the measles vaccine and this is currently being provided from our supplies, at no cost."

Sgt. Victor Theodore of the St. Lucia Marine Police told ABC News on Thursday that no one had gotten on or off the ship since it was quarantined. He said the ship is scheduled to depart Thursday night for Curacao, its home port.

Theodore did not know where the boat had come from and could not confirm the identity of the person with measles.

The Freewinds website describes the ship as "a religious retreat that marks for Scientologists the pinnacle of their journey to total spiritual freedom."

"Its position at sea is designed to provide an aesthetic, distraction-free environment off the crossroads of everyday life," it reads. "As a center of spiritual enlightenment, it is a place where lives are transformed."

The Church of Scientology has not responded to a request for comment from ABC News.

On Wednesday, the island's chief medical officer confirmed that the Ministry of Health was investigating a possible case of measles aboard a cruise ship currently docked in one of its ports.

Dr. Merlene Fredericks James said in a YouTube video on Tuesday that a cruise ship was being quarantined because of fears that others on the ship may be infected.

She said that her department had learned early Tuesday morning from "two reputable sources" that there had been a case of measles on a cruise ship that had visited St. Lucia.

At the time, James did not name the cruise line or the boat, and did not say where it came from.

"Measles, we know, is a highly infectious disease ...So because of the risk of potential infection, not just from the confirmed measles case but from other persons who may be on the boat at the time, we thought it prudent to make a decision not to allow anyone to disembark," she said. "The Ministry of Health continues to work with all authorities."

In her YouTube announcement, James referred to the current measles outbreaks in the U.S., and advised residents traveling to the U.S. and other parts of the world that they ensure they and their children are adequately vaccinated against the disease.

On Monday, the U.S. Centers for Disease Control and Prevention reported that there had been 704 cases of measles reported nationally so far this year.

Preliminary global data showed that reported cases of measles have been up nearly 300% in the first three months of 2019 compared to the same time frame in 2018, according to the World Health Organization.

However, vaccination should be offered at any interval following exposure in order to offer protection from future exposures.

ABC News' Meghan Keneally and Kirit Radia contributed to the reporting in this story.

Editor's note: A previous version of this story reported that the St. Lucian government was investigating a possible case of the measles on the ship. The story has been updated to reflect that the government has since confirmed that one of the passengers has been diagnosed with the measles.
Report a correction or typo
Related topics:
abc newsnational
Copyright © 2020 ABC News Internet Ventures.
More Videos
From CNN Newsource affiliates
TOP STORIES