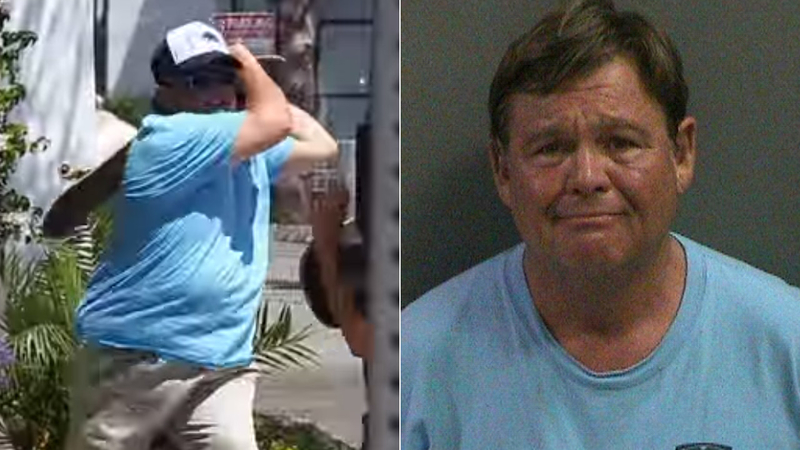 RANCHO SANTA MARGARITA, Calif. (KABC) -- Parents are pulling students from a Rancho Santa Margarita school on Tuesday after a teacher who was caught on camera threatening a young skateboarder was back on campus on Monday.

Thomas Hammer, who was a second-grade teacher at Cielo Vista Elementary School, was seen threatening to hit a skateboarder in a video that was posted on YouTube in June 2013. The incident appeared to be unprovoked. He was arrested about two months later and placed on administrative leave.

Hammer originally faced a felony charge of taking property and a misdemeanor charge of assault with a deadly. When the felony charged was dismissed, he was allowed to return to campus "in a support role working with other teachers," the district said in a statement.

Parents are furious and want the district to guarantee that the teacher will not be back on campus ever again.

"It's shameful and unacceptable that the district has even gotten to this point, and that he's on our campus in the first place," said Karly Foster, a parent and the vice president of the school PTA. "As parents, we should feel comfortable to send our students to a safe environment."

Foster said when her three children saw the video on the news, they told her they were scared to attend school.

"That should never be a feeling in any child's heart to be afraid to come to school," she said.

The district said it is "committed to working toward a resolution to this matter." The PTA is expected to discuss the issue at their meeting on Thursday.

Hammer will appear for a pre-trial hearing on Thursday. He has pleaded not guilty to the misdemeanor charge.