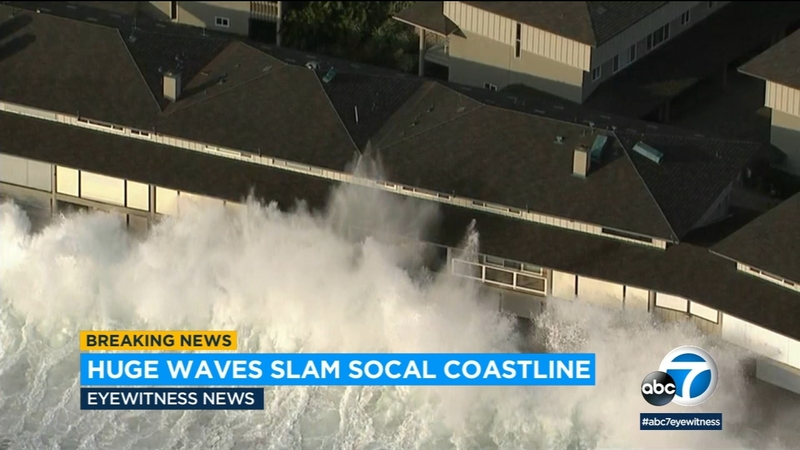 LAGUNA BEACH, Calif. (KABC) -- High tides and big surf are putting on a show and creating dangerous conditions along beaches throughout Southern California.

Farther up the beach, the waves were splashing over a rock barrier, flooding the exterior walkways of an oceanside hotel with water up to the second floor.

Tom Papak was surprised Thursday while visiting Aliso Viejo from Rancho Santa Margarita with his wife.

"We come here once or twice a week and I've never seen the waves this big. It's just huge, you know, anywhere from five, six, seven feet. I guess last night they were around eight to 10 feet," Papak said.

Surfers at The Wedge in Newport Beach were taking on the swell.

Meanwhile, lifeguards in Los Angeles County were warning the public on social media about rip currents.

High tides and big surf are putting on a show and creating dangerous conditions along beaches throughout Southern California.

The sand was packed a little higher Thursday, as the area braced for the continued high tide.

In Aliso Beach, the Lost Pier Cafe saw the waves make their way through the patio Wednesday, leaving behind a sandy mess, filled with shells and forcing the restaurant to close early Thursday, as the spectacle continued.

Sarah Coeyman and her friend had to move several times as the water took over.

"The water was coming almost over the wall where we were sitting. It was just really high tide the lifeguards were running every which way every time they saw someone near or around the rocks. They were hustling out there to say, 'Come back, come back.'"

Wayland Rengifo and his friend were visiting from Atlanta. Rengifo said he preferred to take the advice from lifeguards and watch safely from a distance.

Nearly all US mainland coastal areas will see a surge in high-tide floods in the mid-2030s, when a lunar cycle will amplify rising sea levels, a NASA study found.

"I can't get out there and walk like I normally do or go swimming or anything like that so yeah, it sets you back, but you still gotta come out here and enjoy the day, no matter what you do," Rengifo said.

People planning a visit to Aliso Beach need to prepare for a bit of a walk because as long as the tide remains high the public parking lot next to the water will be closed.