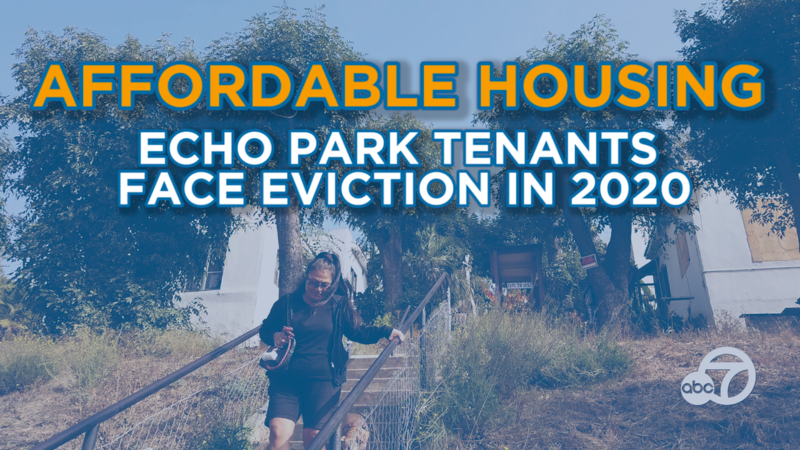 All 10 tenants living in this bungalow court on Sunset Blvd in Echo Park are getting evicted in 2020.

Some of these tenants grew up in these exact bungalow courts, some of them have just grown up in the neighborhood but the common denominator: it's affordable housing.

"I've been in here since I was four years old. My sisters been living here since she was two and my little sister has been here her whole life. She was born here," said Fernandez.

"This is the neighborhood I grew up in and my mom doesn't live far from here. She lives up on Echo Park Avenue so this is kind of home to me," said tenant Ansis Hoheisel.

When the developer first proposed the plan to the Echo Park Neighborhood Council in February, the board unanimously voted against the project.

"The developer proposed 70 units and only six of them were going to be affordable. There's 10 affordable units right there so it just doesn't make sense for us to approve that," said Echo Park Neighborhood Councilmember Thomas DeVoss.
"The current bungalow has been there since 1922, people have lived there for decades so it was going to be a major loss to the neighborhood if we allowed them to do that," said DeVoss.

Bungalow courts are close to becoming extinct with less than 350 in LA.

That's when members of the community stepped in to submit the bungalow court for historic cultural designation which the Echo Park Neighborhood Council has given their support.

But in the meantime, these tenants are still facing eviction and worried they won't be able to afford to stay in the neighborhood they call home.

"It's frustrating because people in high positions should assure the community of a decent place to live, to exist, to work, to be useful to society," said tenant Nora Sanchez.

"I mean everybody complains about homelessness- why? If we're not helping them? Homeless people-they're not bad people. They're just human like us and I don't want to end up like that. Sometimes it comes to my mind. It makes me feel really bad," she said.