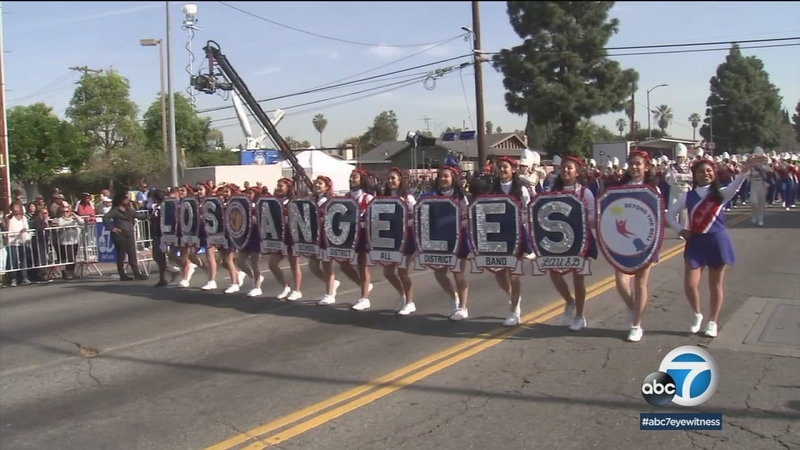 ABC7 was proud to broadcast the event on Monday.

It is the nation's largest and oldest King Day celebration. This year's theme was "When They Go Low, We Go High" and commemorated Dr. King's 89th birthday and 50th anniversary of his homegoing.
The parade started at 10 a.m. at Western and MLK Boulevard. The parade route went down MLK Boulevard to Crenshaw Boulevard, where it turned left. The parade ended at Vernon Avenue.

The parade was broadcast live from 11 a.m. to 1 p.m., with ABC7 Eyewitness News anchors Michelle Tuzee and Leslie Sykes as hosts. ABC7's David Ono, Ellen Leyva, Marc Brown and Dallas Raines were also on hand, as they joined in on the parade as part of the celebration.
After, viewers continued the celebration at the Leimert Park Kingdom Day Freedomfest, which was running from 11 a.m. to 5 p.m. Parade-goers can enjoy booths, food, community and music.

Sen. Kamala Harris, named this year's grand marshal, said she was proud to be in Southern California to celebrate King's vision of diversity and strength.

"In the midst of a time when leaders are selling hate and division, it is really important to remember that we as a country are so much better than that, and it is not who we are," she said.

A group wearing Times Up shirts walked in the parade behind Harris, including actress Natalie Portman. Times Up is a movement created to defeat and fight against sexual harassment. It was founded in response to sexual misconduct allegations against movie mogul Harvey Weinstein and other powerhouse names in the entertainment industry.

L.A. Mayor Eric Garcetti also participated in the annual parade and talked about ways Southern Californians can not only mark history but make it.

Los Angeles Mayor Eric Garcetti shares ways SoCal can continue to fight for equality and diversity in the community.

"Ending homelessness, standing up against the sort of racism we saw at the highest levels this week; standing up for our immigrants and including everybody," he said.

For more information on the parade, visit: www.kingdomdayparade.org.