Compton potholes: Help on the way in the form of $2 million for repairs, street paving 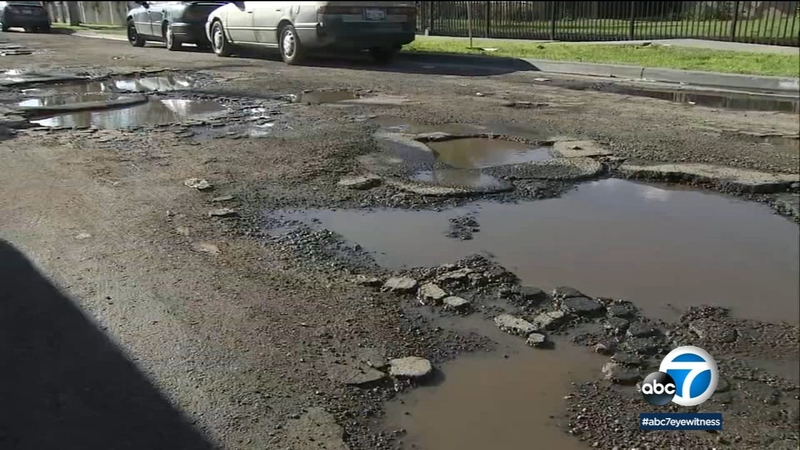 Compton problems: $2M in help on the way

COMPTON, Calif. (KABC) -- Many streets in Compton are so riddled with potholes, some of the city's residents compare the scene to that of a war zone or a third world country.

"Like a war zone, because there's so many holes," said Timyia Smith.

Folks living on Saunders Street have been seeing the roadway outside their homes deteriorate to the point where there may be more pothole than road.

"Like we're in a third world country," said Dejon Smith. "Every week, every week it's a new hole. Or it's a hole connected to another hole. And it's just deteriorating faster and faster.

"You have to kinda like swerve through and sometimes there's cars. It's dangerous," described Gisselle Cortez.

Busted tires, broken axles and wrecked rims have Compton residents fuming over potholes. But a family is working to fix the problem on at least one street.

Compton City Manager Cecil Rhambo says help is on the way in the form of $2 million in pothole repairs and street paving.

"I see them. I drive the streets myself, I jog the streets myself just to look at it, actually fill potholes myself on weekends. It's actually happening and if we can catch a break in the weather, they'll see things happen even quicker, but there's some major rehabilitation projects right on the way as we speak," Rhambo said.

"It's like a war zone."
Compton residents infuriated over the state of their streets. Hear what the City of Compton plans do do about this mess at 6 @ABC7 pic.twitter.com/w6LBOgPlIz

Still, for residents who have to drive through the gauntlet every day, repairs have not come soon enough.