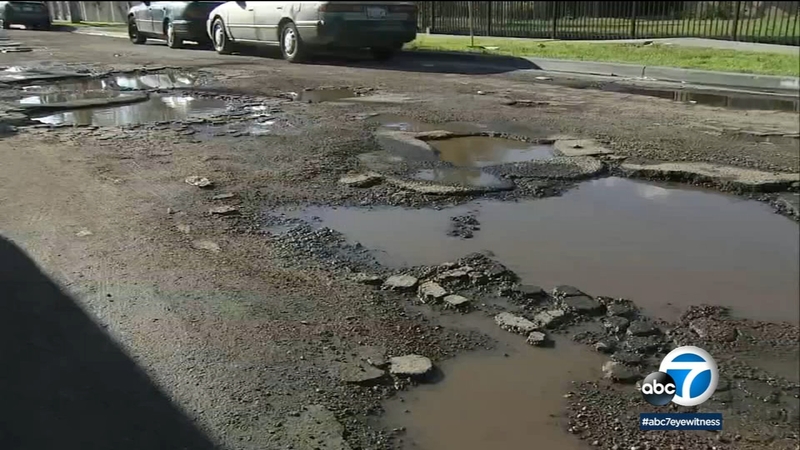 COMPTON, Calif. (KABC) -- Nine months after Eyewitness News last reported on Compton's pothole crisis, the city manager says 70% of its streets still need repairs, but some progress has been made.

His street is still full of potholes, and while a nearby street has been repaired, he feels the work has been slow.

In March, city leaders promised a $2 million allotment to the issue. Compton City Manager Craig Cornwell says at least a dozen street sections, including Exmoor Avenue and Killen Place, have been either fully resurfaced or repaired since July.

"We have dropped 4,000 tons of asphalt, which is approximately almost two miles of pothole repairs," Cornwell says.

Some people living on those streets, like Elvia Valle, are grateful, but Valle explains she went to several city council meetings to complain before the work was finally done.

The sentiment among residents: relief if your street is repaired, but frustration if you're still dealing with pothole-filled streets.

"We just have a huge challenge and we're out meeting the challenge," says Cornwell.

Besides the resurfacing work completed by hired contractors, city crews have been filling potholes, though the rain undoes that work, making matters worse.

On Tuesday, the city council considered another $2.5 million allocation, paving the way for contractors to resume resurfacing streets.