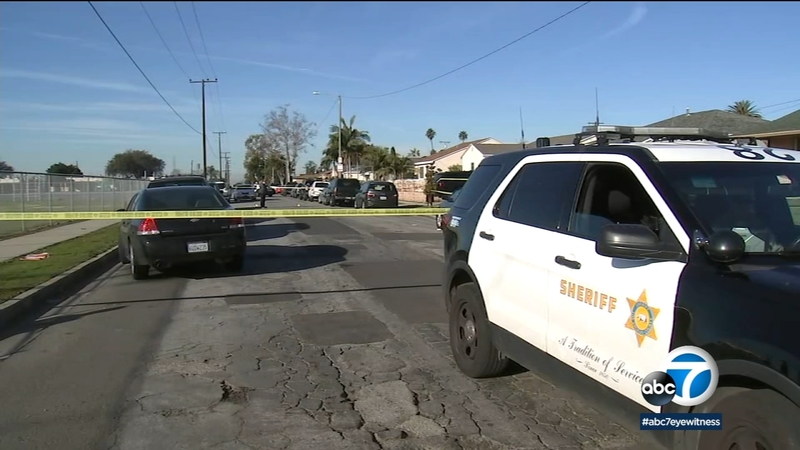 COMPTON, Calif. (KABC) -- The new year got off to a violent start in Compton, where gunfire erupted at a party, leaving a woman dead and a man in critical condition.

Homicide detectives detained a man as a person of interest in the shooting, according to the Los Angeles County Sheriff's Department.

Detectives believe the man wounded in the shooting is the woman's estranged husband, who showed up to the party and allegedly shot her. He was then shot by the person of interest.

"Right now he's being question, but we'll know as the investigation progresses," said Lt. Robert Westphal with LASD. "It appears that there was a party at the location and the disturbing parties are family members."

Both victims suffered gunshot wounds to the chest, authorities said. Paramedics rushed the victims to an area hospital, where the woman was later pronounced dead and the man was listed in critical condition.

"The person of interest and (the) female victim's two children, who are between the ages of 10 and 14, were at the scene of the crime and were not injured,'' according to a statement from the sheriff's department. "The incident is not gang-related and the weapon has not been recovered.''

Some residents heard the party and gunfire but mistook the noise for fireworks. They say the area hasn't seen many incidents.

Sheriff's homicide detectives asked anyone with information regarding the shooting deaths to call 323-890-5500.