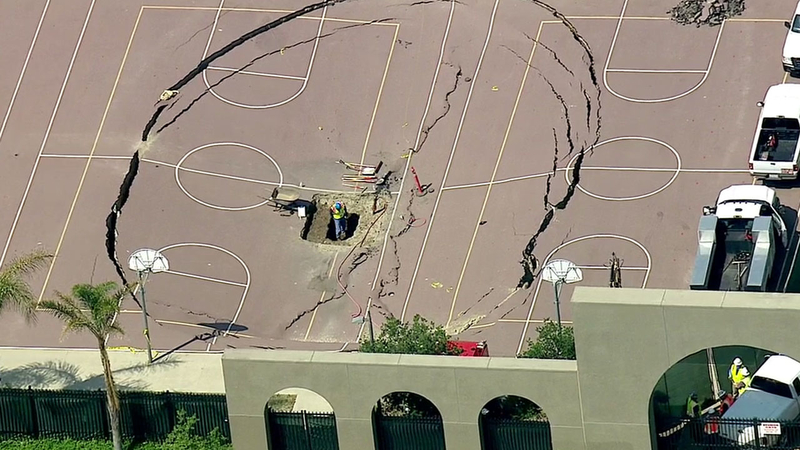 HUNTINGTON PARK, Calif. (KABC) -- Crews are working to repair a man-made water collection basin which has prompted the collapse of the basketball courts at Linda Esperanza Marquez High School in Huntington Park.

Los Angeles Unified School District officials say they've been monitoring the basin since it began to fail months ago.

"That pavement began to settle, we noticed in January, and it's continued to settle to the point that it's collapsed now back into the man-made hole that we created," LAUSD Chief Facility Executive Mark Hovatter said.

Hovatter says the gaping hole is what's left of a retention basin designed to collect stormwater, so it could soak into the aquifer instead of pouring out into the street. It's essentially an underground pond that's been covered over with pavement.

"Right now, we're still trying to investigate exactly which of those structure members failed. We'd like to know who's accountable for this, and then what we have to do to correct it," Hovatter said.

He says 40 of them have been installed at local schools, and that two others have experienced minor problems but nothing like this.

The crater has been a big fascination for students. It's been fenced off and off limits to people since cracks and settling were spotted at the start of the year.

As of Tuesday, the hole was about 45 by 75 feet long and about eight feet deep.

"It got all of a sudden way bigger after the weekend, and who knows what could happen after it sinks in," student Juan Sotelo said.

But LAUSD officials say the crater is done growing, and that there's no reason for anyone to be concerned.

"We know exactly where it's going to end. It's going to end where we see it today. There's no danger of this spreading over. The neighbors next door don't need to worry that their house is going to get sucked up in a sinkhole," Hovatter said.

The high school is located at 6361 Cottage Street. The fix is expected to take between two to three months, officials said.