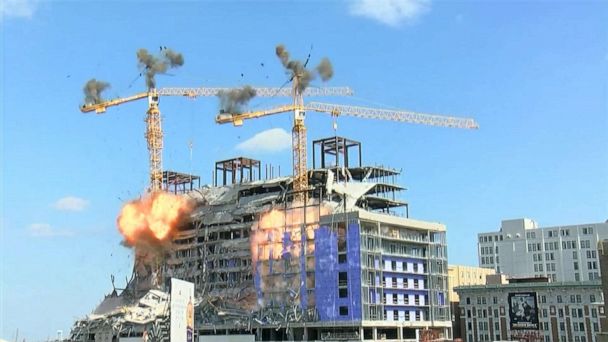 Crews have conducted a controlled demolition at the Hard Rock Hotel in New Orleans to bring down two cranes standing at the site.

Video of the demolition showed a brief explosion followed by one of the cranes toppling to the ground. The other crane appeared to remain standing after the smoke cleared.

Officials said at a news conference Sunday afternoon that the building is "more secure now" than it was before the demolition.

"I do not think it could have gone much better," said New Orleans Fire Department Chief Timothy McConnell, adding that the situation is "way better than what it looks" like.

A rear portion of one of the cranes hit a sewer line on the ground but missed an electrical and gas line, which were the main concerns for the engineers, McConnell said. The crane that remains on top of the building is now more stable and will be cut down piece by piece, he said.

Three windows at the nearby Saenger Theatre were broken, but it is unclear whether other surrounding buildings sustained any damage, New Orleans Mayor LaToya Cantrell told reporters.

The next objective for crews is to retrieve the remains of two of the victims who died last weekend and then to assess a plan to demolish the structure completely, Cantrell said.

Three workers were killed and dozens more people were injured after the cranes collapsed on Oct. 12. The bodies that are still inside the building are expected to still be in the same place as before, McConnell said.

The cranes were a source of major concern as they continued to sway after the accident.

The demolition was originally planned for Friday but was delayed until Sunday. The delay came after city officials determined that the cranes were more damaged than previously thought.

City officials ordered an evacuation of the area surrounding the partially collapsed hotel, located on the edge of the historic French Quarter, on Sunday morning. Demolition crews attached small explosives known as energetic materials to the cranes in an effort to bring them down in the same place as where they were standing several stories above the ground.

One crane stood at about 270 feet high and the other at about 300 feet high, The Associated Press reported.

Ten of the injured victims have filed a lawsuit against five companies involved in the construction.