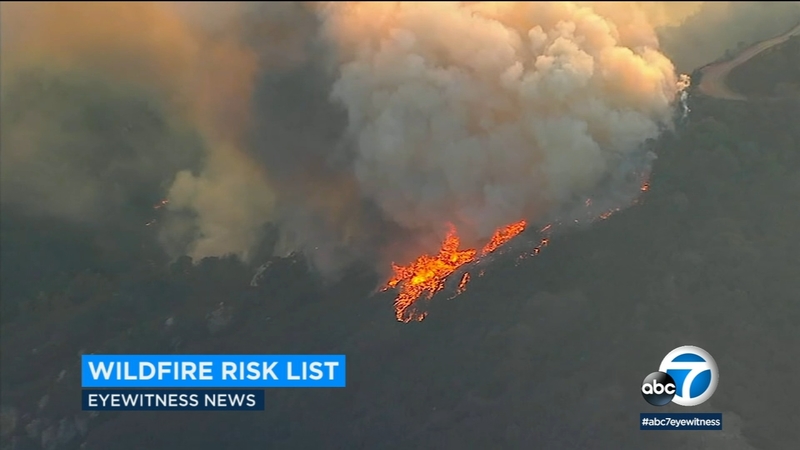 LA CANADA FLINTRIDGE, Calif. (KABC) -- Los Angeles, Riverside and San Diego have the most homes in the western United States considered to be at high risk of being destroyed or damaged by a wildfire, according to a report released Thursday by data firm CoreLogic.

The report also says 30,000 homes in Orange County are at high risk of fire danger, and the associated costs of rebuilding after a fire are in the billions.

"It's becoming very expensive to insure homes, and insurance companies have been paying more attention in the past few years to the risk of wildfire in the homes that they are currently insuring," said Shelly Yerkes, Senior Product Manager for Wildfire at Core Logic. "And, in the areas where they're looking to grow their business."

Click here to check the wildfire risk for your area

Richard Bisetti has lived in his home in La Tuna Canyon since the 60s and says he had to buy more expensive insurance because of wildfire danger near his home.

And Tracy Adams, who lives near the same burn scar area, had only one choice for insurance.

"I'm not happy with that. I don't really have a lot of options; it's nice to have options," Adams said.

David Farrand had his fire insurance cancelled after the Station Fire and had to get out-of-state insurance.

"Then we had to go to an agent, and they had to search nationwide for fire insurance and we found some out-of-state insurance at a higher rate," Farrand said.

Pasadena Deputy Fire Marshal Wendell Eaton says wildfires are of particular concern in Southern California because of the climate and where homes are located.

"Homes that are interspersed within the wild land area, such as the top of a hill, inside of a draw, inside of a saddle are targets for this fire's natural movement up the hill," he said. "And, so it places California at a pretty significant risk the way our homes are situated in the urban interface."
Report a correction or typo
Related topics:
los angeles countyriverside countyorange countywildfirestudy
Copyright © 2021 KABC Television, LLC. All rights reserved.
TOP STORIES
Light rain moves through SoCal Tuesday with more expected this week
More than $100,000 worth of jewelry stolen in DTLA robbery, police say
13-year-old boy killed, 2 wounded in Wilmington shooting
2 people robbed at gunpoint during holiday party in Pacific Palisades
50 mutations in omicron could be its downfall, data shows
Former LADWP general manager to plead guilty to federal bribery charge
113 LAFD firefighters put on unpaid leave due to vaccination mandate
Show More
LA County reports 3rd case of omicron variant
School officials could face charges in Michigan shooting: prosecutor
Remembering the Japanese-American heroes who fought in WWII
Devin Nunes stepping down from Congress by end of 2021
Kentucky Derby winner Medina Spirit dies after workout in Arcadia
More TOP STORIES News