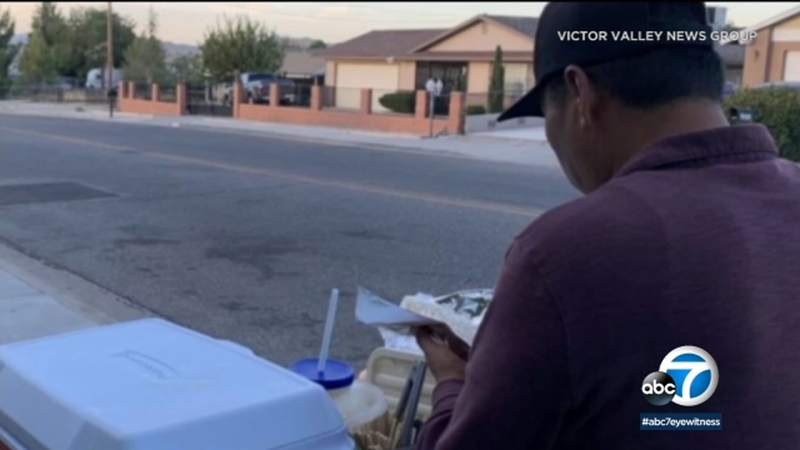 Street vendor's customers rally around him after attack

VICTORVILLE, Calif. (KABC) -- The corner of Hughes Road and Rodeo Drive in Victorville was empty Wednesday afternoon. The street vendor best known as the 'Elote Man' was not there to sell the roasted corn that has earned him a legion of loyal customers.

On Monday, just after 6 p.m. Moises was brutally beaten and robbed at knifepoint by two men.

"Nobody ever messed with him until now. Must have been some knucklehead kids. Had to have been because everyone in this neighborhood respects him," said Patrick Walker.

"I gave them what I had in my purse..they said they wanted more money," the victim told Eyewitness News.

The 48-year-old father of three was taken to a hospital with multiple injuries.

"They hit me in the neck and back. The doctor says my head isn't fractured so I'm happy about that," said Moises.

Customers who learned of the assault have rallied in support of Moises - one set up a GoFundMe account and another customer offered to reimburse the money stolen.

"I've never seen anyone work so hard...as hard as that man works. It's a shame," said Bill Rosenthal.

"He was out there everyday hustling for everything he gets," said Navatney Morgan.

Moises has vowed to return to his corner when he is feeling better, but customers are worried for his safety.

"He should not be out here...They are going to try and do it again," said Cesar Castro.