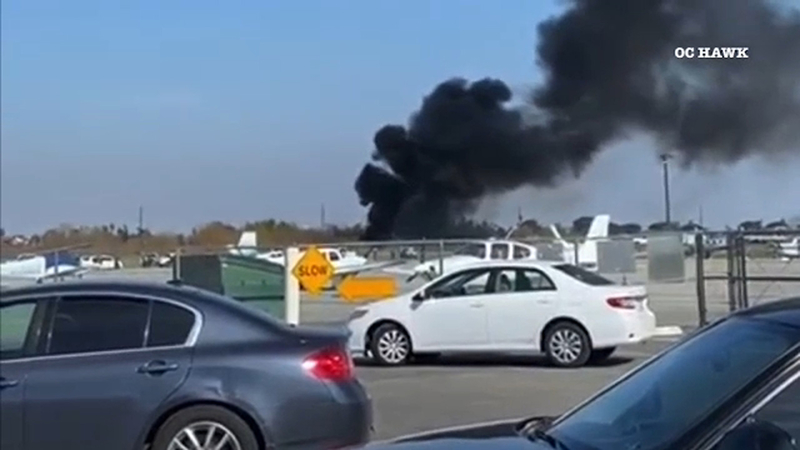 The aircraft crashed on the east side of the airport, according to the Corona Police Department. Officers responded to the incident around 12:11 p.m. and discovered the plane engulfed in flames.

Officials said the plane was attempting to take off when it struck a fence on the far end of the runway and flipped over. The fuel that the aircraft was carrying spilled onto the vegetation, igniting the flames that scorched 1/4 of an acre.

Family members tell Eyewitness News one of the victims is Joseph Zingali of Torrance. The remaining victims have not been identified.

A witness said he saw two men and two women board the plane, then attempt to lift off the runway twice.

"He lifted off the second time and the wings were going from end to end and the nose pitched up, and then he went out of my sight," said Kenneth Coster.

A man who was in his hangar on the other side of the airport rushed to the scene to try and help after hearing screams.

"There was smoke and it was pretty hot... Me and my buddy, we were going to try and get them out but we couldn't get more than 10 feet close," Matthew Keenan said. "It was just burning too much, there were plane parts moving,"

The airport was closed as crews continued to assess the damage. The Federal Aviation Administration and the National Transportation Safety Board will investigate the incident.

The coroner’s office just brought out stretchers to retrieve the bodies from the wreckage at Corona Airport. Still no identity of the 4 victims. @ABC7 pic.twitter.com/o8cpoZ9SOc