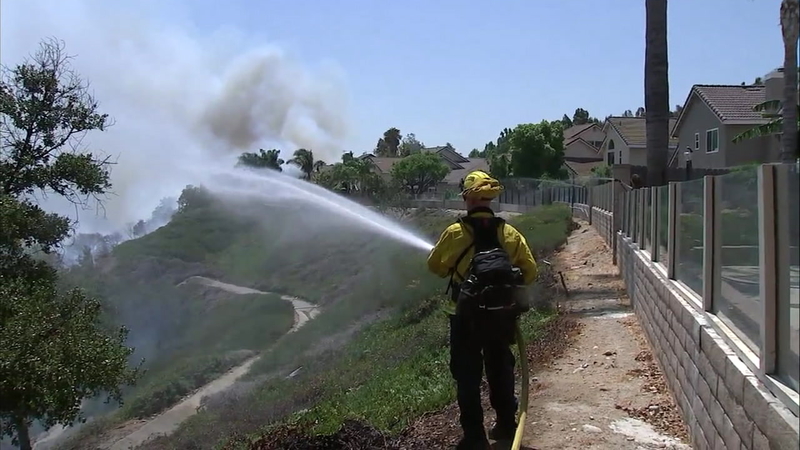 CORONA, Calif. (KABC) -- All evacuations were lifted after a vegetation fire erupted dangerously close to homes in Corona on Thursday.

Mandatory evacuations that were in place for the following streets: Nutmeg, Juniper, Dogwood, Bayberry, Huckleberry, Amber, Cattail, Via Cielo, Camellia, Silkwood, Via Viento, Via La Brisa, Vista Lomas, Via Corazon were lifted at approximately 12:15 p.m., according to the Corona Fire Department.

The fire started at about 11:30 a.m. near Palisades and Serfas Club drives, sending plumes of smoke into the air, according to fire officials.

All evacuations have been lifted. Residents can return to their homes. https://t.co/pzJPljJG9M

Water-dropping air resources and firefighters on the ground battled the tall flames and provided structure protection.

After stopping the forward progress of the fire, Corona FD officials tweeted that all residents can return to their homes.

While evacuation orders were issued, some residents chose to stay in their home and tried to fight the fire with their own water hoses.

"The fire was just right behind our house. So I got the house, my wife was already hosing it, so I continued hosing it. Then went on the roof of the patio cover. They said the eaves are what might catch fire, so I water that down," resident Robert Brown said.

Other residents said they packed whatever they could in case they had to flee. The fire also burned dangerously close to business center.

Officials confirmed the blaze was approximately 5 acres in size. Firefighters remained in the area mopping up any possible hot spots.