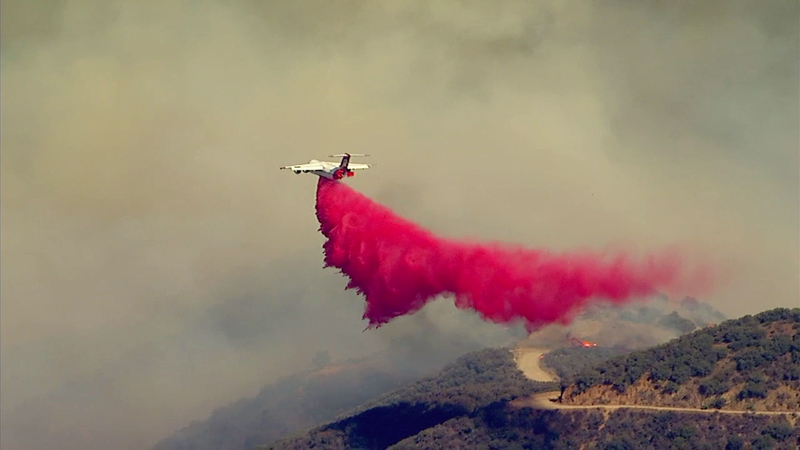 CORONA, Calif. (KABC) -- Firefighters battled a smoky and fast-moving brush fire in the hillsides west of Corona on Thursday.

The blaze, dubbed the Skyline Fire, is 250 acres with 5 percent containment, according to Cal Fire. It broke out shortly after 3 p.m. in the area of Skyline Drive and Burrero Way, an unincorporated part of Riverside County.

About 240 firefighters from Cal Fire, Riverside County, Corona and Cleveland National Forest worked to clear the blaze, which burned at a moderate rate of speed, fire officials said.

The fire burned near a hiking trail at the Cleveland National Forest and moved toward homes. At one point, planes dropped fire retardant on homes as the flames crept closer.

One helicopter from the Angeles National Forest and one air attack were requested to continue water drops for night operations.

Evacuations were ordered for the Orchard Glen Community, but shortly before 10:30 p.m., most of the orders were lifted.

Quintanilla was one of those still under evacuation orders, but chose not to go.

"We have the kids and the animals ready to go, but we just don't want to leave. We don't want to be out of our house that long," she said.

Other residents said they're accustomed to the fire danger, but said there's been a few fires within a short time.

Foothill Avenue was shut down in both directions between South Lincoln Avenue and Paseo Grande.