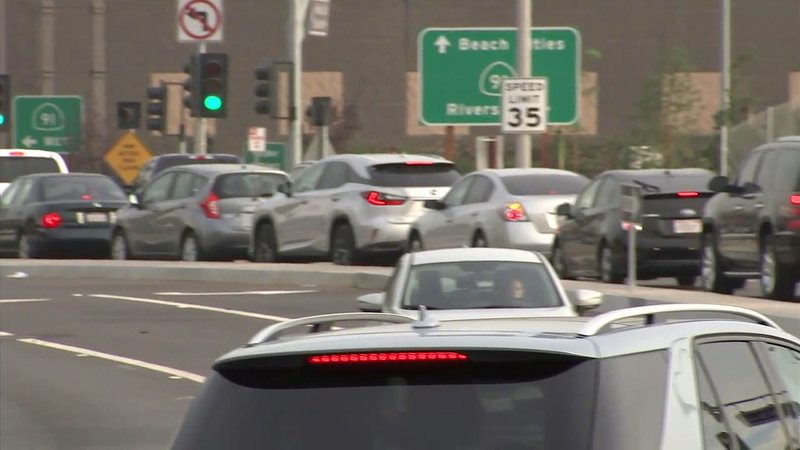 CORONA (KABC) -- If you think traffic is bad on the 91 freeway through Corona, just getting to the freeway in that part of the Inland Empire can be nearly as difficult.

"It's a beautiful neighborhood, quiet and peaceful," said resident Damon Rachell. "Except between 6 and 9 in the morning."

As the traffic started to back up on the freeway around 5:30 Wednesday morning, soon the side streets in the area also became snarled with vehicles.

Pine Crest Drive is a residential street leading to Serfas Club Drive. But for many commuters, it's a short cut to the 91 freeway. But with so many people using such a small street, cars move at a snail's pace.

Consequently, drivers lose their patience. Many try to cut around the stopped traffic by crossing the double-yellow line, and driving on the wrong side of the road. Then at the bottom of the street, some of those drivers then cut back in front of all the waiting cars.

"It's like New York City," said Dale Ploung, who's lived in the neighborhood known as Coronita for 36 years. "There's a lot of people who are stressed, you're always concerned about somebody snapping."

The neighborhood is a natural chokepoint, with so many drivers cutting through neighborhoods to get around stopped traffic on the 91 freeway. "If this was the heart of Corona, this is where they need to put a stent in," said Ploung.

The CHP worked traffic control in the area on Wednesday. Officers wrote citations for driving on the wrong side of the road; turning right from a left-hand-turn-only lane; and gridlock.

"They are trying to cheat the system," said CHP officer Dan Olivas. "They don't want to wait in line with everyone else, and they are committing a violation."

The CHP said many drivers come through these small areas because they're directed to do so by traffic apps in their smartphones.

"With all these apps, a lot of people are looking for the quickest way when there's so much traffic," said Olivas. "Unfortunately, in this area, the infrastructure just wasn't designed for this kind of traffic."

Residents claim traffic in their neighborhoods has become even worse since the Riverside County Transportation Commission finished work on a $1.4 billion project that added two toll lanes to the 91 freeway through Corona.

"We can't build ourselves out of this," said RCTC Executive Director Anne Mayer. "Sometimes when we finish a project, it simply moves the bottleneck from one place to another."

Mayer said that to adequately manage the traffic flow under current loads, the 91 freeway would need a total of 22 lanes, and there's just not room in the Santa Ana Canyon. At present there are 14 lanes, four of which are toll-based.

What concerns residents even more though is a proposal to add more than 400 new homes to a neighborhood already besieged with gridlock.