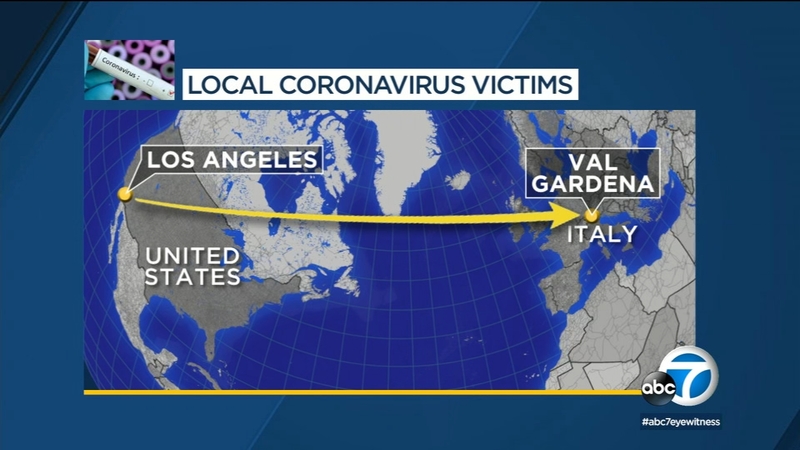 One day after a state of emergency was declared in Los Angeles County as six new cases of novel coronavirus were reported, four additional cases of the potentially deadly infection were confirmed.

L.A. Department of Public Health officials said Thursday the additional cases are part of a group of seven travelers who were on a ski trip in Val Gardena, Italy.

The patients, who were also traveling with nine others, initially thought the symptoms were caused by a cold. However, when they arrived in Los Angeles earlier this week, they were tested immediately.

The seven travelers who tested positive for coronavirus have been quarantined in L.A. County, and health officials are monitoring anyone who they came in close contact with.

Tarzana resident Pam Angel said her husband and two adult sons went on the ski trip. She has been unable to see them but spoke with them.

Angel's husband, Dennis, and sons, Cory and Brian, have all been quarantined. Cory has been hospitalized in Tarzana and Dennis and Brian have been isolated in a separate Tarzana home.

"I have talked to (Cory) and I have FaceTimed him. Today, he is feeling worse than he felt yesterday, and he looked awful. It broke my heart," Angel said. "The attending doctor told Cory, and this was yesterday, that he wanted him out. Reason being, he feels that Cory is a health risk for the doctors, the nurses, the staff and other patients. Where's he gonna go? Go where? He clearly needs to be monitored 24/7."

Angel said she went to the hospital and begged the staff to see Cory, but she was not allowed to do so.

Including a previous case, there are now a total of 11 cases across the county, including a contracted medical professional who conducted passenger screenings at Los Angeles International Airport. None of the local cases are believed to be a result of community spread, which means the patients may have become infected after coming in contact with someone who contracted the virus.

The L.A. County Board of Supervisors on Wednesday declared a state of emergency, saying the declaration would allow greater coordination among various levels of government and stressing that they were acting out of "an abundance of caution'' and not panic.

In addition, California's first coronavirus fatality - an elderly patient who apparently contracted the illness on a cruise - prompted Gov. Gavin Newsom Wednesday to declare a statewide emergency as six new cases, including a medical screener at Los Angeles International Airport, were confirmed.

Newsom said the emergency proclamation is intended to help procure supplies and resources quickly. He announced the move Wednesday afternoon during a news conference, hours after the patient's death in Placer County was announced.

The measure made California the third U.S. state to declare a state of emergency, joining Washington and Florida, amid 11 deaths in the United States.

California currently has 53 confirmed cases of coronavirus. More than 93,000 cases of the illness have been confirmed globally.

News of the new L.A. County cases came just after Orange County health officials announced that two people tested positive for the novel coronavirus, though the diagnoses were described as "presumptive positive," pending final confirmation from the Centers for Disease Control and Prevention.

The impact of the coronavirus is being felt all across Southern California.

For in-depth coverage of the new coronavirus, go to www.abc7.com/coronavirus