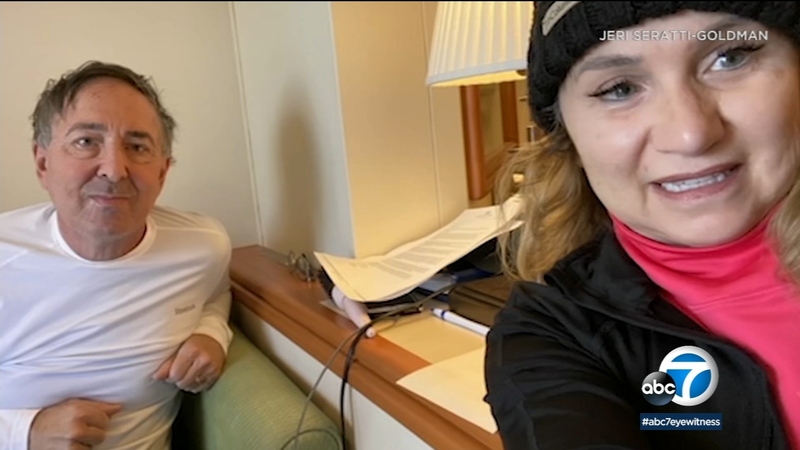 Santa Clarita man who tested positive for coronavirus back home

SANTA CLARITA, Calif. (KABC) -- A Santa Clarita man who tested positive for the novel coronavirus is finally back home after weeks of quarantine.

Carl Goldman and his wife, Jeri, were quarantined aboard a cruise ship in Japan last month that experienced an outbreak of coronavirus.

The Goldmans were among some 380 Americans who boarded a flight on Feb. 16 from Tokyo, where the passengers were quarantined on the Diamond Princess for nearly two weeks. The couple, owners of KHTS Radio, had been documenting their experiences on Facebook Live.

A Santa Clarita man who remains in isolation in Nebraska after testing positive for coronavirus said his health is improving, but tests still show he has the infection.

The couple was diverted to Nebraska after Carl became ill and came down with a fever two hours into the flight to Travis Air Force Base in Northern California.

His wife was able to return to Southern California but he stood there to undergo further testing while in isolation.

A couple from Santa Clarita are on their way back home to California after being quarantined for over a week on a cruise ship in Japan due to an outbreak of the coronavirus.