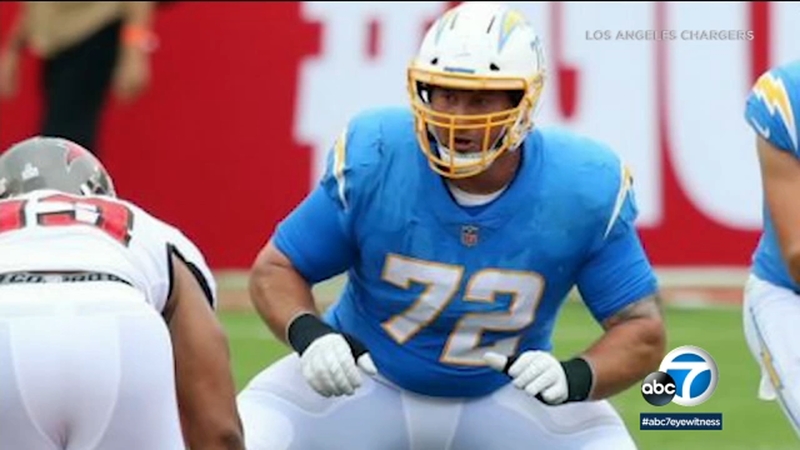 LOS ANGELES (KABC) -- For the third time this week, a Los Angeles sports team has been hit with a player testing positive for COVID-19.

First, Dodgers third baseman Justin Turner tested positive, with the results coming back Tuesday during Game 6 of the World Series. Turner was instructed to leave the field in the seventh inning, but then returned to join his teammates in celebrating the championship.

Also on Tuesday, the Los Angeles Football Club announced a player tested positive. Upon receipt of the initial positive result, the player, whose name was not released, self-isolated under a strict and detailed protocol, according to the Major League Soccer team. The player will remain in isolation and be monitored by the team's medical staff.

All other LAFC players also underwent testing Tuesday and additional rapid testing before Wednesday night's 2-1 victory over Houston Dynamo at Banc of California Stadium and returned consecutive negative test results and do not have symptoms.

Then on Thursday, word came of a Los Angeles Chargers player also receiving a positive test result. Guard Ryan Groy was placed on the NFL's COVID-19 reserve list and the team's practice was canceled.

Chargers head coach Anthony Lynn himself had recovered from COVID-19 earlier this year before the season began. Lynn sent the team home to retest as the Chargers wait to see if Sunday's game will be held as scheduled.

"We'll get another round of testing back tonight and we'll know more," said Lynn. "But as of right now I just want to make sure we keep it contained and give the players a little more peace of mind."

Turner's decision to return to the field has divided Dodger fans.

As they lined up at Dodger Stadium to buy championship merchandise, some said they weren't bothered by him returning the field in defiance of instructions. Defenders of Turner noted he had already been on the field mixing with teammates before receiving word of the test.

The Dodgers touched down in L.A. after winning the World Series Tuesday as MLB investigates Justin Turner's COVID-19 diagnosis.

"He was with the players the whole seven innings before," said fan Yvette Lira of Azusa. "Two innings doesn't make a difference. "

Others, particularly those who have seen or experienced the dangers of the coronavirus firsthand, were less forgiving.

"With COVID here we have to take a lot of precautions," said Susana Pacheco of Los Alamitos. "My uncle died of it so for me, I have a different take on it. He shouldn't have been there."

Meanwhile, fresh off the Lakers' world championship, the NBA is now saying it hopes to start a new, shortened season before Christmas. The season would feature 72 games with a play-in tournament and most likely no All-Star Game.

The NBA still needs the players union to approve the plan.