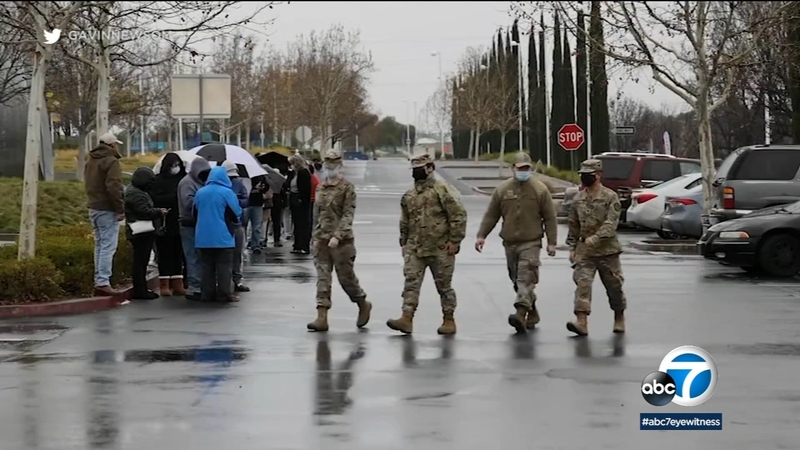 More than 200 guard members are being deployed now - and likely more in the near future - to 50 OptumServe sites to help with clinical staffing and crowd control, the governor said.

There are already some 6,000 testing sites set up across the state and many have had their hours expanded recently amid the omicron variant surge.

If you’re feeling sick, don’t hesitate to get tested.

The governor's move comes as it becomes more and more difficult to find test kits in many parts of California. Delays in getting results are causing increasing frustration and contributing to the surge of infections that in just two weeks more than doubled the number of people in hospitals with COVID-19.

Negative test results can be a necessity for any number of activities, from going to work to boarding an airplane or attending a sporting event. Delays in getting results - or inability to find a test kit - can mean people with very mild or no symptoms may presume they are not infected and go about their usual routines.

"If you are tested and you're positive then you know you need to isolate," said Abraar Karan, an infectious diseases doctor at Stanford University. "If you can't get tested, and you don't have the luxury to just quarantine without knowing, sure, you may have people going out and infecting others."

The surge of cases in California has led to a soaring demand for tests that in many places simply can't be found. Some county mail-in testing programs have been halted due to exploding demand. In places where tests are available, people sometimes have to wait in line for several hours.

There's also been a lag in obtaining test results. Kirsten Bibbins-Domingo, an epidemiology professor at University of California, San Francisco's medical school, said she heard one lab was taking nine days to return results - longer than someone exposed to COVID-19 may have to quarantine.

"If you are trying to do the right thing, and you decided to wait in line to get a test, having a long time to get actionable information is not helpful," she said. "It's sort of absurd."

Some people have resorted to paying $100 or more for a rapid result - something many can't afford.

Shane Hirschman, a 36-year-old from San Clemente, said he ordered a mail-in test kit from the Orange County health agency last week but never received one.

When he started feeling sick this week, he said he couldn't find an at-home kit in stores and testing appointments at nearby pharmacies were booked. He wound up paying nearly $100 for a rapid test to confirm he didn't have the variant.

In Los Angeles County, where a quarter of the state's nearly 40 million people live, overwhelming demand prompted a temporary halt to a program that allowed people to test at home and mail back their sample. Public health director Barbara Ferrer said she hopes the testing crunch will ease in coming days. In the meantime, she urged restraint.

"Please don't decide that because you didn't get tested, you don't have COVID and you don't have to stay home if you've got symptoms," she said. "We do ask while we're trying to increase testing capacity and make it much easier for everyone who need to test to get a test that you please stay home while you're symptomatic."

California, like the rest of the country, has been overtaken by the omicron variant, which spreads more easily than other coronavirus strains. It also more easily infects those who have been vaccinated or had previously been infected by prior versions of the virus, though it appears less likely to cause severe illness.

Since Christmas, more than 5,000 people in California have been admitted to hospitals with COVID. In many cases, they went in for something else and only learned they were infected upon testing.

State models used to forecast the impact of the virus show that within a month California could have a record 23,000 people in hospitals with COVID-19.

Orange County, the state's third most populous with more than 3 million residents, is among a growing number of places where hospitals are becoming strained by the flood of COVID patients coupled with a high number of nurses and other workers who are not on the job because they are infected or quarantined due to exposure to the virus.

Dr. Regina Chinsio-Kwong, the county's deputy health officer, said many hospitals have resorted to using tents to triage patients, something not seen since a year ago when the state was in the throes of its deadliest surge. Ambulances are waiting nearly an hour to drop off patients.

"It is a dire situation right now," she said.

The following sites in Los Angeles County are receiving support from the state National Guard: