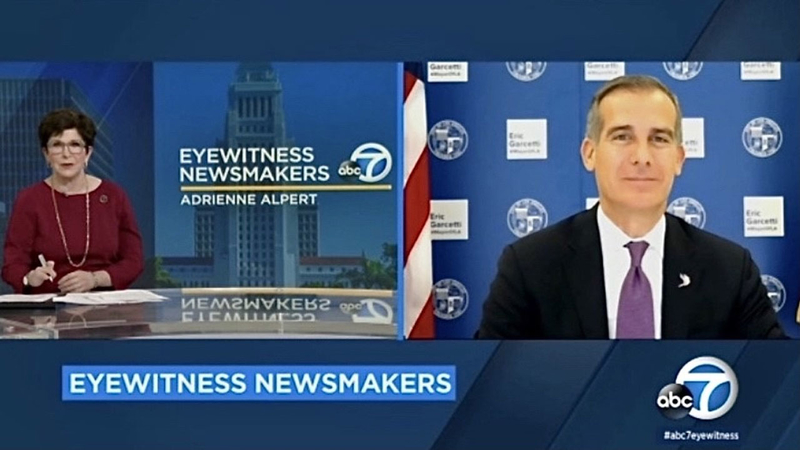 The city's mass COVID vaccination site at Dodger Stadium will close at the end of May, and Los Angeles will shift attention to other city sites. There is also diminishing demand for vaccines.

Speaking on Eyewitness Newsmakers, Mayor Eric Garcetti urged viewers to call the city's 311 service to find a convenient vaccination site if the stadium is no longer available.

"Dodger Stadium was the biggest site in the world, when it was up and running at its peak," the mayor said. "Now it is a place that we simply don't need as much and with the baseball season here, we can accommodate the demand."

The mayor added there are still many people delaying their vaccination. Soon, an appointment will not be necessary. Almost half of eligible residents have received one dose of vaccine. About one-third are fully vaccinated.

Gov. Gavin Newsom's handling of the pandemic is one reason for the recall which has qualified for a state vote. Garcetti opposes the recall election. Due to the pandemic, it could cost as much as $400 million .

"I would say we have democracy and we have an election next year and this is a huge waste of time and money. Certainly, I not only support this governor, I've seen him behind the scenes in ways that I think few Angelenos know," Garcetti said.

"And I think that's what elections are for. A recall, somebody's done something criminal, something way beyond the pale, not just simply because you disagree with somebody," the mayor added.

A viewer question asked the mayor if the city is adding homeless housing to all council districts. The mayor said it should be. City Councilman John Lee is opposing a homeless housing project in his district which includes veterans.

"I agree, whether it's every single council district, I don't think that we should be rolling back, especially when we have developments ready to go," the mayor said. "I know how long it takes to find land, how long it takes to get funding, and as a veteran myself, we have to continue to prioritize those veterans."
Garcetti joined California's Big City Mayors group, asking Sacramento to send a budget surplus of $4 billion a year for five years for cities. L.A.'s share would be in addition to the mayor's proposed $1 billion homeless budget.

"We stepped up with a justice budget, our biggest commitment ever; nearly a billion dollars of local dollars. We're challenging the legislature, the governor, who have been wonderful partners, to date, to meet the moment, especially now that they're sitting on a $50 billion surplus," he said.

The federal order to clean up Skid Row just got a 60-day stay. The mayor says Judge David O. Carter's order can't force people off streets when they are offered housing. The mayor says their hands are tied on some funding, but the city and county are trying to work with the judge.

"We've already made one agreement with the court, with the county to house an additional 6,700 people. I welcome the opportunity to sit down and have a mature discussion about what's possible, and to stretch as far as we can to house as many people now," the mayor said.