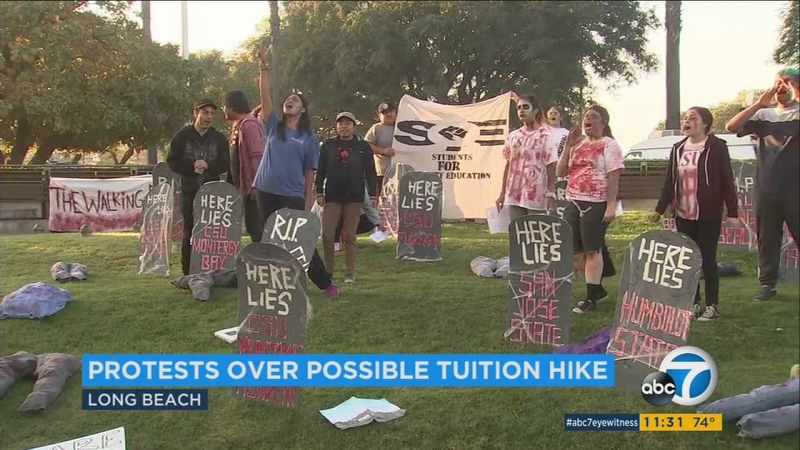 LONG BEACH, Calif. (KABC) -- The Cal State University Board of Trustees voted on Tuesday to a potentially raise tuition, a proposal not favored by many students.

Students protested against the possible tuition hike in Long Beach, where the two days of meetings were taking place. About a dozen students staged a scene they called the "Walking Debt" to voice their concerns.

"You keep reaching into our pockets and we're suffering," one student said to the board of trustees. "Every time y'all come up with these crazy concepts and you want to dig into our pockets I feel less and less valued. I feel like a dollar to all of you."

The proposed increase of roughly 5 percent would be the first tuition hike in six years.

The hike would affect all CSU campuses and would bump up the tuition by approximately $270 per year for undergraduates - something that many students say they simply can't afford.

The money from the potential hike would help make up for roughly $344 million that the CSU system is trying to come up with to help cover rising costs related to faculty hiring, salaries and a statewide push to increase graduation rates.
Critics say a tuition increase would force many students to drop out. However, school officials say a tuition hike is not their first choice.

"If we don't get increased funding, it's an option that we need to discuss. It's also something that we have to notify our students of in advance as it's state law that we notify them and let them know that we may be considering it," said Toni Molle, CSU's public affairs director.

CSU officials said their goal was to seek a state funding increase to bridge a $168 million gap in their new budget request for the upcoming school year.

The university system said if the $168 million gap was not closed, the board would have to consider scaling back its budget or increasing tuition. CSU said Tuesday's vote would allow the board to implement the tuition increase if the gap was not closed by the next school year.

The possibility of a tuition hike was first raised by the CSU in September, prompting meetings with the California State Student Association and other affected groups.

"So it's on the table. We've been consulting with our students. We've had discussions with them. The students from CSAA are going to be advocating with us as well as our faculty and staff," Molle said.