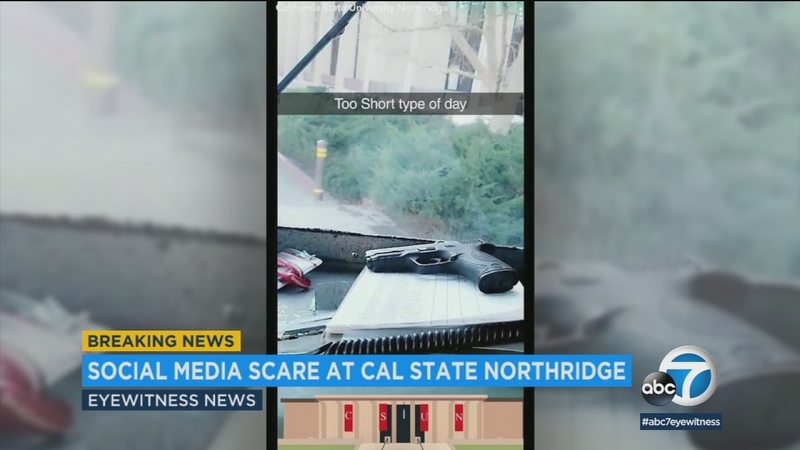 NORTHRIDGE, LOS ANGELES (KABC) -- A social media post depicting a gun resting on a stack of papers with Cal State Northridge in the background caused alarm on campus Friday.

The video post that appeared in CSUN's Snapchat location story was circulated on various social media platforms and appeared to show a handgun resting on top of a stack of papers along with the caption, "Too Short type of day."

To all of you on campus or going to campus today pls pls pls be careful! Someone posted this on CSUN’s Snapchat story. DPS has already been notified, but still stay safe everyone ! pic.twitter.com/5DM9jdyeEn

CSUN officials initially said they were aware of the Snapchat post, and that campus police confirmed that it was a hoax, but later said the video was "staged" by an armored car company employee who had been on campus Friday.

"CSUN Campus Police have confirmed that the video featuring a gun on campus that was posted to social media is a hoax. There is no threat to campus. CSUN remains open and operational," a CSUN spokesperson said in a statement.

A CSUN official confirmed that the employee confessed to posting the video.

The Los Angeles Police Department said officers responded to the campus of Cal State Northridge after call about a man with a gun, but found no evidence to substantiate the report.

According to a tweet from the LAPD, the call came in around 12:16 p.m. Officers checked the scene and subsequently left.

"We can confirm no evidence of a man with a gun or any crime," said a tweet from LAPD's headquarters account.