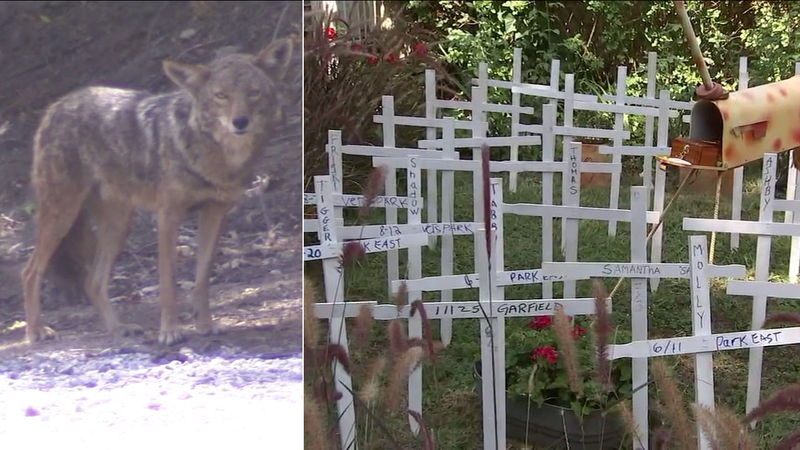 CULVER CITY, Calif. (KABC) -- Pet owners are sounding the alarm in Culver City over an increasing number of coyote attacks.

Dozens of pets have been lost to the predators.

So many, in fact, that residents have installed a makeshift memorial with crosses representing all the cats killed by a coyote.

Through a survey neighbors say the number of coyote kills has been unprecedented in this corner of Culver City.

The memorial set up in a front yard, with names and addresses of pets lost, serves as a demonstration to Culver City officials about the number of coyote kills.

"We documented 50 deaths of animals where there were still enough of the remains so that we could identify them," said Gelli Harris of the group Save Our Pets.

The Carlson Park neighborhood is adjacent to Ballona Creek, a natural corridor for wildlife.

Jesus Reyes learned too late, finding what was left of his kitty Samantha.

"It is something that I will never forget," he said.

Neighbors blame city officials for not alerting the entire community.

The city manager tells Eyewitness News that they have a coyote management program in place and have done extensive outreach.

Neighbors are demanding more. Some are calling for trapping and relocating or euthanizing at least some of the coyotes.

Coyote experts say that hazing - scaring off the animals by yelling, throwing sticks or spraying a garden hose - is enough to chase them away.

But pet owners say the attacks happen when they aren't with their pet.

And in at least one case, the pet owner's scream didn't scare off the coyote: It just picked up the cat it had killed, moved a few feet away, and kept eating.