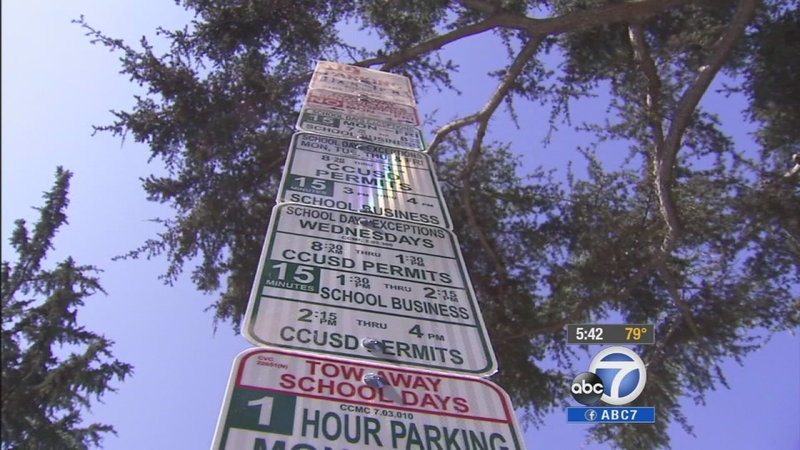 CULVER CITY, Calif. (KABC) -- You've seen those street-parking signs that take forever to read just to figure when you can and can't park. In Culver City, parking signs went up that are very long and complicated.

Residents on Irving Place in Culver City woke up to quite an interesting addition to their street Friday morning: a 15-foot-tall, 8-sign-high parking sign outside of Linwood Howe Elementary School.

"It would take you longer to read this than to park here," said Terry Smith, who lives across the street from the sign.

When the Culver City Mayor Meghan Sahli-Wells first saw the sign, she didn't think it was real.

It was no joke. It was an attempt to alleviate parking problems around the school for local residents, teachers going to work, and parents dropping off their kids.

"If you get more than five, six, seven, I think in this case it was eight signs in the worst parts, people's eyes glaze over. There's just no way of really taking in all that information," said Sahli-Wells.

With school set to begin on Monday, the mayor ordered what she called all excess signs taken down. But some remained Friday night, six signs high, leaving residents confused.

Of course you could avoid all the parking confusion simply by following the mayor's lead:

"The irony is that I'm the 'biking mayor,' so my goal has been to get people out of their cars and be able to walk and bike safely to school," said Sahli-Wells.