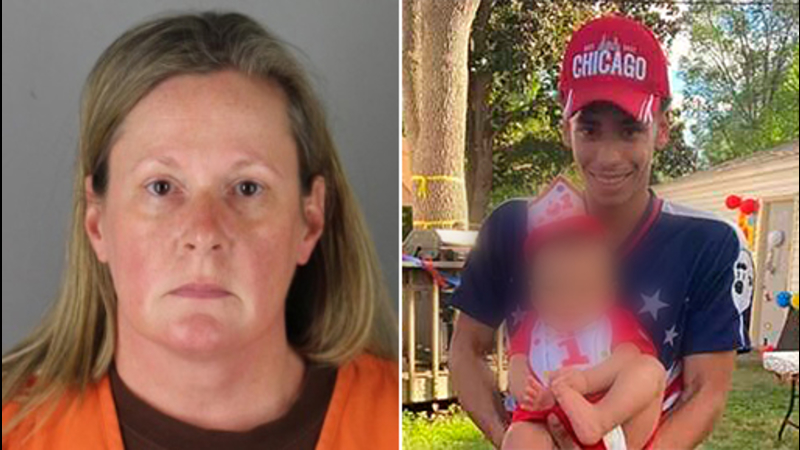 Former Brooklyn Center police Officer Kim Potter was charged with second-degree manslaughter in Sunday's shooting of Wright, 20, during a traffic stop. The former police chief of Brooklyn Center, a majority nonwhite suburb, said Potter mistakenly fired her handgun when she meant to use her Taser. Both the chief and Potter resigned Tuesday.

The 48-year-old officer joined the police force in 1995 and has spent time as a trainer and a union president.

Potter - who was released on $100,000 bond hours after her Wednesday arrest - appeared alongside her attorney, Earl Gray, at her initial appearance Thursday over Zoom, saying little. Gray kept his camera on himself for most of the hearing, swiveling it only briefly to show Potter. Her next court appearance was set for May 17.

Wright's death has been followed by protests every night this week outside the city's police station, with demonstrators sometimes clashing with officers who have driven them away with gas grenades, rubber bullets and long lines of riot police.

While the Thursday night protest in Brooklyn Center focused largely on Wright's death, some in the crowds noted it came hours after police in Chicago released graphic body camera video of an officer fatally shooting 13-year-old Adam Toledo, a Hispanic boy, in March.

"It is happening in every single city, every single day across the country," Jaylani Hussein, executive director of the Minnesota chapter of the Council on American-Islamic Relations, told protesters early in the evening, before leading them in a chant of "Say his name! Adam Toledo!"

The parents of Daunte Wright, the 20-year-old Black man shot and killed by a police officer Sunday, said they "can't accept" that their son's killing was just a mistake.

Protesters also tied air fresheners to the fencing at the police station, a nod to Wright's mother saying that her son told her he had been pulled over for an air freshener dangling from his mirror. Police say Wright was stopped for expired registration.

Wright's family members, like the protesters, say there's no justification for the shooting.

"Unfortunately, there's never going to be justice for us," Wright's mother, Katie Wright, said at a news conference Thursday. "Justice isn't even a word to me. I do want accountability."

Wright family attorney Ben Crump and others point to the 2017 case of Mohamed Noor. The Black former Minneapolis police officer fatally shot Justine Ruszczyk Damond, a white woman, in the alley behind her home after she called 911 to report what she thought was a woman being assaulted.

Noor was convicted of third-degree murder in addition to second-degree manslaughter and sentenced to 12 1/2 years in prison. Potter's charge carries a maximum 10-year prison sentence. Intent isn't a necessary component of either charge. A key difference is that third-degree murder requires someone to act with a "depraved mind," a term that has been the subject of legal disputes, but includes an act eminently dangerous to others, performed without regard for human life.

SEE ALSO: How does an officer use a gun instead of a Taser?

Noor testified that he fired to protect his partner's life after hearing a loud bang on the squad car and seeing a woman at his partner's window raising her arm. Prosecutors criticized Noor for shooting without seeing a weapon or Damond's hands.

Many critics of the police believe the race of those involved in the Wright shooting played a role in which charges were brought.

"If the officer was Black, perhaps even a minority man, and the victim was a young, white female affluent kid, the chief would have fired him immediately and the county prosecutor would have charged him with murder, without a doubt," Hussein said earlier Thursday.

Potter could have been charged with third-degree murder, which carries a 25-year maximum sentence, said Rachel Moran, a law professor at the University of St. Thomas in St. Paul, Minnesota. But she noted that Potter will likely argue that using the gun was a mistake, while Noor never said he didn't intend to use his weapon.

"They were both killed over misdemeanors," said Philonise Floyd, George Floyd's younger brother as he compared Wright's case to his brother's. He said he won't leave Wright's family's side.

"This is kind of the compromise charge, which isn't to say it's not serious. It is," Moran said. "But they're not reaching for the most serious charge they could theoretically file. They're also not washing their hands and saying she has no criminal liability."

Wright's death came as the broader Minneapolis area awaits the outcome of the trial of Derek Chauvin, one of four officers charged in George Floyd's death last May. Crump pointed to that trial as having the potential to set a precedent for "police officers being held accountable and sent to prison for killing Black people."

Police say Wright was pulled over for expired tags, but they sought to arrest him after discovering he had an outstanding warrant. The warrant was for his failure to appear in court on charges that he fled from officers and possessed a gun without a permit during an encounter with Minneapolis police in June.

Body camera video shows Wright struggling with police after they say they're going to arrest him. Potter, a 26-year veteran, pulls her service pistol and is heard repeatedly yelling "Taser!" before firing. She then says, "Holy (expletive), I shot him."

Experts say cases of officers mistakenly firing their gun instead of a Taser are rare, usually less than once a year nationwide.