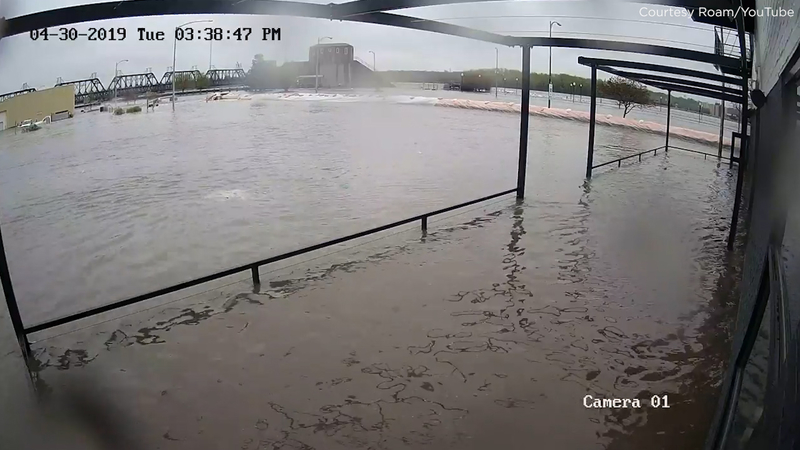 DAVENPORT, Iowa -- A surveillance camera in Iowa captured the frightening moment a levee broke following extended, heavy rainfall, sending more than a foot of water rushing into the surrounding area.

The dramatic footage was posted to YouTube by the owners of Roam, a restaurant in downtown Davenport on the banks of the Mississippi River in the Quad Cities region. The actual breach is visible in the footage at 3:33 p.m. local time on April 30.

As bystanders run to safety, water consumes the restaurant's parking lot in a matter of minutes. Employees can be seen running from the restaurant and toward higher ground before the water reaches the front door.

The restaurant was not open for business at the time of the flood. Employees inside the building had been preparing the business for the threat of floodwaters, ABC affiliate WQAD reported.

By 3:39 p.m., the parking lot is under what appears to be at least a foot of water. Several surrounding city blocks, too, were inundated with floodwater.

The National Weather Service sent an alert around 4 p.m. of a flash flood emergency in Davenport, urging people downtown to immediately seek higher ground. Public works officials said many people in the area sought shelter on the rooftops of downtown buildings.

Mayor Frank Klipsch said there were no reports of injuries.

"This is a couple of blocks of one part of our city. It's, fortunately, a relatively small area being flooded," Klipsch told the Associated Press.

Roam's management posted on the restaurant's Facebook page that the business was "completely underwater and will need an extensive renovation." They launched a GoFundMe campaign to help support staffers who are out of a job until the restaurant can reopen.

"There are more questions than answers at this point, but we can assure you we will rebuild," they pledged.

The rain came as the Mississippi River approached record or near-record crests in Iowa, Illinois and northern Missouri. The river at the Quad Cities had been at major flood stage or higher for 41 consecutive days.