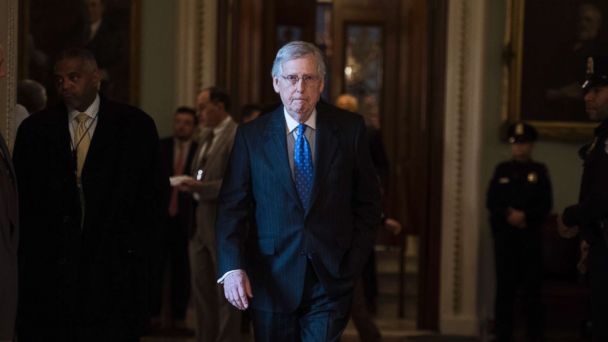 The nation returned on Tuesday from a holiday weekend to a government still shut down, 32 days after the costly political impasse began.

Senate Majority Leader Mitch McConnell is expected to introduce a bill on the Senate floor as early as Tuesday, aides for the senator told ABC News, following a plan announced by the president over the weekend that would trade protections for DACA recipients -- undocumented immigrants brought to the U.S. illegally as children -- for wall funding -- though the plan was quickly rejected by Democrats.

The bill is likely to encompass funding for the president's wall as well as funding for the 25 percent of the government that's been shut down for the last month. The bill may also include billions of dollars in disaster aid and an extension on a bill that protects women from violence, aides said.

It remains to be seen if the bill will advance in the Senate, given that most Democrats' are united in demanding that President Donald Trump must reopen the government before they will begin talks about funding border security.

The Transportation Security Administration (TSA) reported Monday that TSA employees called out at a national rate of 10 percent on Sunday, a jump from 3.1 percent one year ago on the same weekend.

According to a statement from TSA, many employees are reporting that they are not able to report to work due to "financial limitations."

TSA spokesman Michael Bilello told ABC News they're in "uncharted territory" as the start of February approaches and rent or mortgage payments are due, which "could have a compounding effect," Bilello said, and force contingency plans at airports nationwide.