Delta passengers at LAX frustrated over 4th day of cancellations 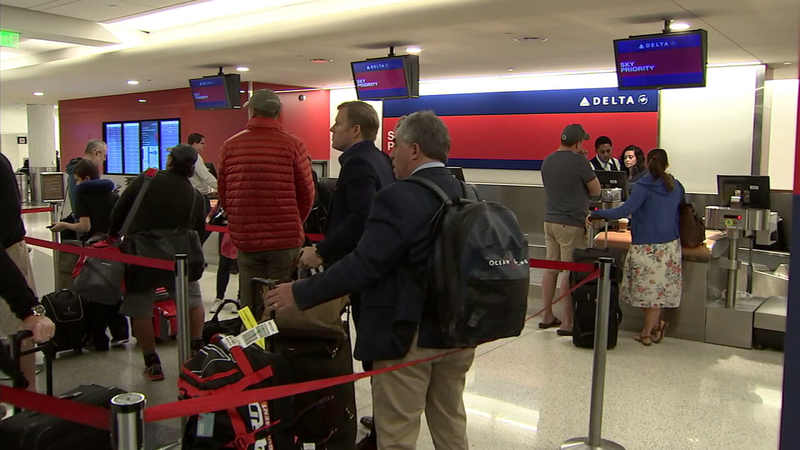 Delta passengers at LAX frustrated over 4th day of cancellations

LOS ANGELES (KABC) -- Delta Air Lines was still playing catch-up on Sunday in Los Angeles and across the country after days of severe thunderstorms caused big disruptions at its hub airport in Atlanta.

The trouble started Wednesday as powerful thunderstorms moved across Georgia and other states in the Southeast, grounding many flights.

About 60 percent of Delta's planes use the Hartsfield-Jackson Atlanta International Airport on an average day. As a result, the airline had to cancel 350 flights on Saturday following three days of major storms. That's on top of roughly 3,000 flight cancellations earlier in the week.

Delta announced Sunday evening that another 150 flights had been canceled.

Travelers at Los Angeles International Airport said although they know weather is to blame, many were frustrated over the airline's handling of the situation.

"I understand weather and storms and things like that, but it's been pretty crazy," explained passenger Tom Courtney. "I was scheduled to go from Vegas to Atlanta on Wednesday. I ended up getting routed through San Diego and then here, to L.A., and I've been in L.A. since then because they couldn't get me home until today, but I'm actually scheduled to fly to New York today, so I'm actually going straight to New York."

As of Sunday morning, one flight was canceled out of LAX and two flights won't make it to the airport due to the ongoing airline issue.

Delta officials said the storms also disrupted pilot and crew rotations but hope to catch up by Sunday afternoon.