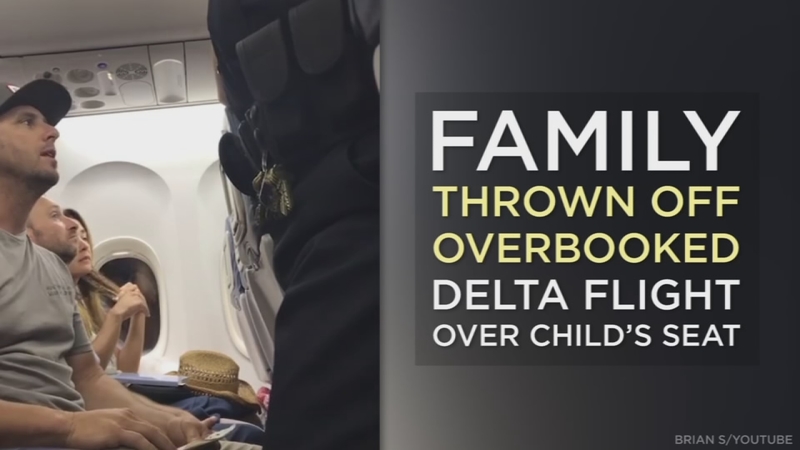 LOS ANGELES (KABC) -- A Southern California family says they were kicked off an overbooked Delta airplane because they refused to yield a seat held by their young son.

The Schear family of Huntington Beach says they were flying from Hawaii to Los Angeles last week when airline staff asked them to give up a seat occupied by their 2-year-old son and carry him on their laps for the duration of the flight.

They tried to refuse and argued with airline staff, but say they were threatened with being sent to jail.

"You have to give up the seat or you're going to jail, your wife is going to jail and they'll take your kids from you," Brian Schear recalled the airline staff telling him.

Despite feeling they were in the right, that threat was terrifying, said Brian's wife, Brittany Schear.

They filmed the encounter with airport staff and posted it on YouTube.


"You're saying you're gonna give that away to someone else when I paid for that seat?" Brian Schear says to an airline employee. "That's not right."

Eventually he agreed to hold his son on his lap for the flight - but it was too late. The airline said the whole family had to leave.

That was around midnight, and the couple and their two toddlers were left having to scramble for a hotel room and pay $2,000 for another flight the next day, on United.

Schear says he originally bought the seat for his 18-year-old son Mason, but then decided to send him home on an earlier flight so that he could use the seat for his younger child, Grayson, who was placed in a car seat.
EMBED More News Videos

A Southern California family says they were kicked off an overbooked Delta airplane because they refused to yield a seat held by their young son.

The airline staff tells him they need the seat because the flight is overbooked and the original passenger whose name was on the seat isn't using it. One airline employee tells him that under FAA regulations, 2-year-old children are not supposed to have their own seats at all and are supposed to sit in parents' laps for the duration of the flight.

"With him being two, he cannot sit in the car seat," one airline employee tells him. "He has to sit in your arms the whole time."

The accuracy of that statement is not entirely clear, as the websites for both the FAA and Delta appear to encourage parents to buy separate seats for young children and use a child safety restraint system.

"We want you and your children to have the safest, most comfortable flight possible," Delta's website advises parents. "For kids under the age of two, we recommend you purchase a seat on the aircraft and use an approved child safety seat."

Brian Schear and his wife were ordered to yield the purchased seat of their infant son Grayson and hold him on their lap.

Schear says Grayson flew in his own seat on the original flight out to Hawaii without a problem. He says Delta knew he was planning to use the seat for his younger son when they boarded their return flight.

"You need to do what's right," he tells the airline employee. "I bought the seat and you need to just leave us alone."

The encounter came as the airline industry is already facing bad publicity for video that showed a doctor being forcibly dragged off an overbooked Chicago flight on United, resulting in a concussion, broken nose and two lost teeth.

The Schear family says the airline reached out to them earlier Wednesday to find out more information after they posted their encounter on Facebook and YouTube and began talking to Eyewitness News.

"We are sorry for the unfortunate experience our customers had with Delta, and we've reached out to them to refund their travel and provide additional compensation. Delta's goal is to always work with customers in an attempt to find solutions to their travel issues. That did not happen in this case and we apologize."