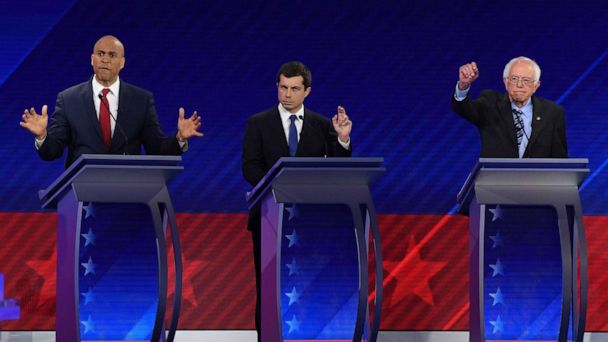 The top-polling presidential candidates tackled an array of issues during Thursday's Democratic debate in Houston, but things got heated when they were asked about how they planned to mend America's growing racial divide.

Recent polls indicate that racism is a top concern among young black voters, especially in the wake of the racially-motivated attack on Latinos in El Paso, Texas last month that left 22 dead.

During the debate, the candidates were asked to explain why they are the best person to address the growing racial divide. Most of the candidates overwhelmingly agreed that President Donald Trump has made the country's racial divide much worse, but they differed on how they planned to take on the issue if elected.

O'Rourke, who said the shooter who targeted immigrants in his hometown of El Paso was inspired by Trump, said issues surrounding racism would be a top priority for him as president.

"Racism in America is endemic. It is foundational. We can mark the creation of this country not at the fourth of July, 1774 but August 20th, 1619 when the first kidnapped African was brought to this country against his will and in bondage and as a slave, built the greatness and the success and the wealth that neither he nor his descendants would ever be able to fully participate in and enjoy," O'Rourke said.

He vowed to sign a reparations bill to address racism "at its foundation."

"We have to be able to answer this challenge. And it is found in our education system where in Texas a 5-year-old child in kindergarten is five times as likely to be disciplined or suspended or expelled based on the color of their skin," he said. "In our health care system where there is a maternal mortality crisis three times as deadly for people of color or the fact that there is ten times the wealth in white America than there is in black America."

"We will also call out the fact that we have a white supremacist in the White House and he poses a mortal threat to people of color all across this country," he added.

"We know Donald Trump's a racist, but there is no red badge of courage for calling him that. Racism exists. The question isn't who isn't a racist, it's who is and isn't doing something about racism. And this is not just an issue that started yesterday," Booker said. "We have systemic racism that is eroding our nation from health care to the criminal justice system. And it's nice to go back to slavery, but dear God, we have a criminal justice system that is so racially biased, we have more African Americans under criminal supervision today than all the slaves in 1850."

If elected, he said he would create an office in the White House to deal with the problem of white supremacy and hate crimes.

"We will make sure that systemic racism is dealt with in substantive plans from criminal justice reform to the disparities in health care, to even one that we don't talk about enough, which is the racism that we see in environmental injustice and communities of color all around this country."

Castro, who served as mayor of San Antonio, Texas, before spending over two years in President Barack Obama's cabinet, said he plans to focus on police reform.

"A few weeks ago, a shooter drove 10 hours inspired by this president to kill people who look like me and people who look like my family," he said, before invoking the names of several black men and women who have died at the hands of white police officers. "White supremacy is a growing threat to this country and we have to root it out."

"We need to root out racism," he said, "because that doesn't represent the vast majority of Americans who do have a good heart."

He said that police reform would be a key part of his strategy.

Buttigieg, who previously said "anyone who votes to re-elect President Trump is, at best, looking the other way on racism," once again accused the president of deepening divisions in the country.

"We know that the generational theft of the descendants of slaves is a part of why everything from housing to education to health to employment basically puts us in two different countries," Buttigieg said. "I have proposed the most comprehensive vision to tackle systemic racism in every one of these areas," he said.

Buttigieg also said that he wanted "to make sure that we're not just dealing with the over-incarceration of black Americans but also black solutions" including "entrepreneurship, raising to 25% the target for the federal government to do business with minority-owned businesses," and "investing in HBCUs that are training and educating the next generation of entrepreneurs."

As president, he said he would focus on "transcending this framework that pits us against each other."

Harris, who is aiming to become the first woman and woman of color to reach the Oval Office, sought to defend her record as a California prosecutor.

"I made a decision that if I was going to have the ability to reform the system, I would try to do it from the inside," said Harris. "Was I able to get enough done? Absolutely not. But my plan has been described by activists as being a bold and comprehensive plan that is about ending mass incarceration, about taking the profit out of the criminal justice system," she said. "I plan on shutting down for-profit prisons on day one. It will be about what we need to do to hold law enforcement, including prosecutors, accountable."

She said ending mass incarceration would be a major priority as president.

"My plan is about making sure that in America's criminal justice system, we de-incarcerate women and children, that we end solitary confinement and that we work on keeping families intact," she said. "As president of the United States, knowing the system from the inside, I will have the ability to be an effective leader and get this job complete."

Klobuchar dealt with dozens of incidents involving black men who were killed by police during her eight years as a Minnesota prosecutor, but she said her record on racial justice issues had been "misinterpreted."

"When I was there, the way we handled these police shootings, I actually took a stand to make sure outside investigators handled them. I took on our major police chief in Minneapolis," she said. "But in the prosecutor's office they were handled with the grand jury. That's how they were handled across our state. I now believe it is better for accountability if the prosecutor handles them and makes those decisions herself."

She said that she was "proud of the work our staff did" and highlighted several cases where her team went after suspects accused of killing African American children.

"What changes did we make? Go after white color crimes in a big way. Diversify the office in a big way. Work with the Innocence Project to make sure we do much better with eyewitness I.D.," Klobuchar said. "And as a senator and as your president I will make sure that we don't just do the first step act when it comes to criminal sentencing, that we move to the second step act which means the 90% of people that are incarcerated in local and state jails, let's reduce those sentences for nonviolent offenders and let's give them jobs and let them vote when they get out of prison."

"We build more rehabilitation centers, not prisons. I'm the guy that put in the drug courts to divert people from the criminal justice system. And so, we have to change the whole way we look at this. And we put people in prison, we have to equip them when they get out. Nobody who got in prison for marijuana, for example, immediately upon being released," he said. "That should be a misdemeanor, they should be out and their record should be expunged."
Report a correction or typo
Related topics:
abc newsnational
Copyright © 2020 ABC News Internet Ventures.
More Videos
From CNN Newsource affiliates
TOP STORIES