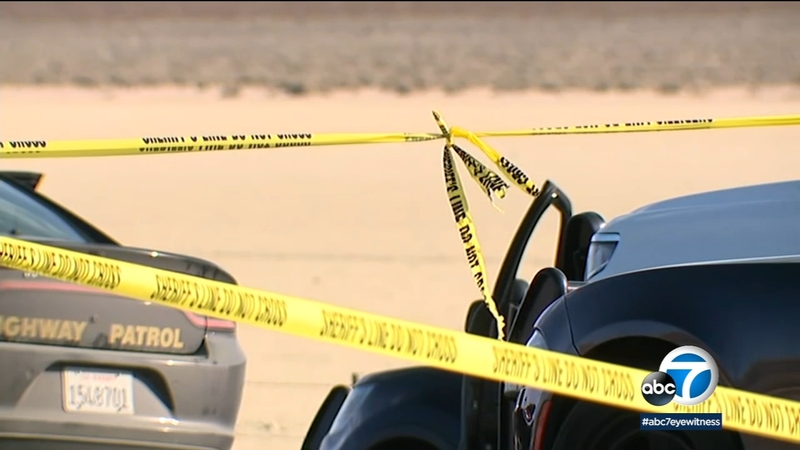 PRIMM, Nevada (KABC) -- A 27-year-old man killed his mother and drove about 200 miles through the Mojave Desert before he was fatally shot by police near the Nevada and California state line Wednesday evening, prompting a nearly 21-hour closure of all northbound lanes of the 15 Freeway.

The investigation began Wednesday when Kern County deputies found 55-year-old Guadalupe Adams dead with "traumatic injuries" in Tehachapi, which is about 35 miles east of Bakersfield.

Kern County deputies believed an "armed and dangerous" man - identified as the woman's son, Madison Adams - was involved in the killing and asked the San Berndardino Sheriff's Department to watch out for him.

"We were given information that the suspect was in a silver 2017 Nissan and to be on the lookout, and be very cautious," said San Bernardino sheriff's spokeswoman Cindy Bachman.

Officers from the California Highway Patrol found the Nissan stopped on the freeway's shoulder in Nipton, which is near the Nevada state line. Authorities from CHP, San Bernardino and the Nevada Highway Patrol conducted a "high-risk" traffic stop.

Details regarding what led to the shooting were not immediately known but officers from each agency opened fire, according to Bachman. Madison was pronounced dead at the scene.

It's unclear if he was armed when he was shot.

The investigation closed the northbound lanes of the freeway on the California side through Thursday afternoon, stranding motorists in a backup between 5 and 8 miles long. The California Highway Patrol's online traffic log reported that two vehicles ran out of gas on the freeway.

Guadalupe Adams, known as "Lupe," had worked for the California Department of Corrections and Rehabilitation since 2006. She was an office technician at the California Correctional Institution in Tehachapi at the time of her death, according to the department.