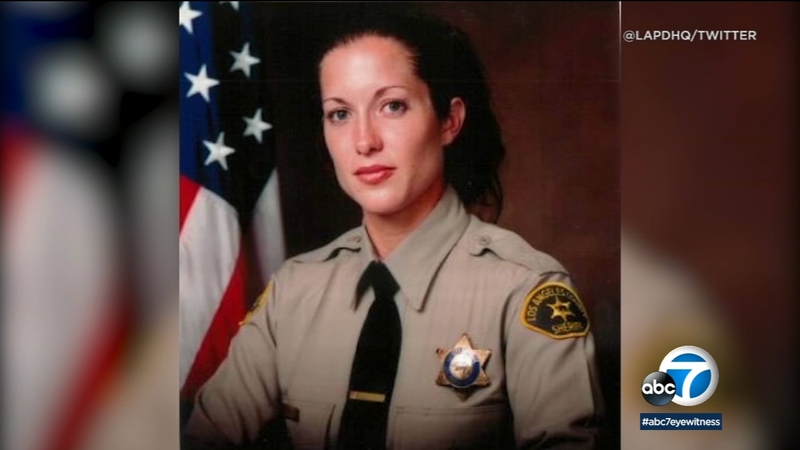 VALLEY VILLAGE, LOS ANGELES (KABC) -- New surveillance video is shedding light on a crash that killed an off-duty sheriff's detective who stopped her vehicle to help an elderly woman cross the street in Valley Village Sunday.

The footage - captured on a surveillance camera at a liquor store near the intersection of Riverside Drive and Whitsett Avenue - appears to show Los Angeles County Sheriff's detective Amber Joy Leist run across the street just as a vehicle that was traveling at a high rate of speed crosses the intersection.

Sheriff Alex Villanueva said Leist was stopped in her car around 11 a.m. when she saw a woman stumble as she tried to cross the street. Leist put her car in park and went to help the woman cross.

While returning to her vehicle, she was struck by the car, which had the green light, Villanueva said.

The detective was the 41-year-old mother of two sons, ages 17 and 20. She was transported to a nearby hospital where she was pronounced dead.

The woman that Leist helped, and her husband who was crossing the street at the same time, were devastated by the incident. They were also deeply appreciative that Leist, a stranger to them, took the time to help them.

"It was very heroic, very nice," said Richard Mehana, whose wife Leslie was assisted by the deputy.

"I got her name on paper and I wanted to call the deputy sheriffs and write a card of condolences. I never met the woman. I wasn't even introduced. She came out of no place. Very loving, very nice."

New surveillance video is shedding light on a crash that killed an off-duty sheriff's detective who stopped her vehicle to help an elderly woman cross the street in Valley Village Sunday.

Residents say pedestrians and drivers need to stay on high alert at the busy intersection.

"It just seems like they're in another world now, they're focused on everything else but what they're doing, which is driving a deadly machine," one man said.

The driver involved in the collision stopped at the scene and was cooperating with investigators, authorities said.

"I have two boys and we sort of talked to them on the way to school this morning about just because you're on the crosswalk doesn't mean you're safe. You always have to look out for cars," one woman said.

Leist was a 12-year LASD veteran.

Dozens of law enforcement vehicles formed a procession Sunday night, and a line of deputies saluted Leist as her flag-draped coffin was taken inside the morgue.

Leist had held various positions with the department, including working as a north county corrections officer, a deputy in Lancaster and a school resource officer. She had spent the last five years with the West Hollywood station where she was promoted to detective.

A makeshift memorial - including flowers, a candle and picture of Leist - is growing outside the West Hollywood station.

"It's a tough loss because Amber was this dynamic personality," said Capt. Edward Ramirez. "When Amber walked into the room, you knew Amber Leist was in the room."