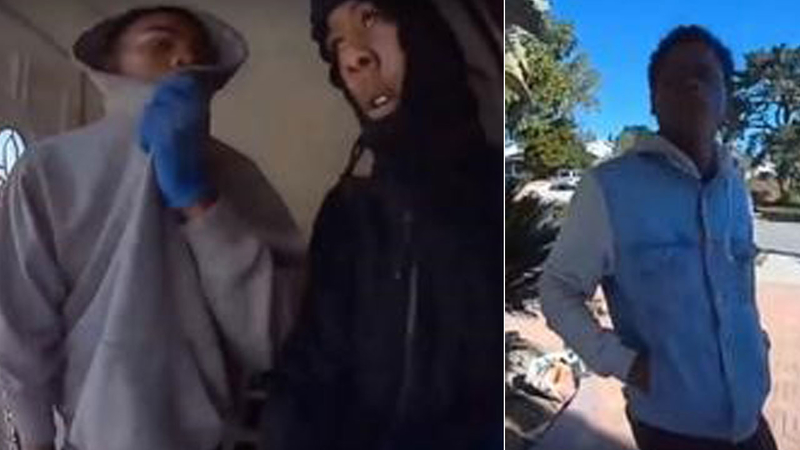 DIAMOND BAR, Calif. (KABC) -- Authorities released surveillance video in the hope that the public will be able to identify suspects involved in a residential burglary in Diamond Bar.

Around 1:30 p.m. Monday, Los Angeles County sheriff's deputies responded to a home in the 1800 block of Ano Nuevo Drive. They discovered the sliding glass door in the backyard was shattered.

The victim's home was equipped with surveillance cameras that captured the burglary.

In the video, one of the suspects knocked on the front door to check if anyone was home. When the suspect determined the house was empty, he alerted two other burglars who made their way into the backyard.

One suspect then shattered the sliding glass door. The suspects ransacked the home, stealing a laptop and an Apple iPad 2.

A fourth suspect, whose appearance was not captured on camera, drove up to the home in a white, newer model four-door sedan. Authorities said it was possibly an Audi and also had tinted windows and paper plates. The three other suspects ran up to the vehicle and fled from the home.

The suspects who were captured on video are described as three men between the ages of 18 and 20. They wore black, gray and light blue hoodies and sweatpants.
"These knock-knock burglars ... they knock on your door and they pretend that they have an excuse, in case you open the door," said sheriff's Deputy Juanita Navarro-Suarez. "What they ultimately want and what they're looking for is for someone not to be home."

On Wednesday, a man that police dubbed the "Tracksuit Burglar" entered a home in Montebello while a 70-year-old resident was inside. The intruder fled.

"You definitely don't want to come across like there's no one home," Navarro-Suarez said. "So you definitely want to make it known, somehow, without opening the door, that someone is home."