At least a dozen people were arrested and an unlawful assembly was declared in South L.A. as protests continued over the deadly deputy-involved shooting of Dijon Kizzee.
KABC 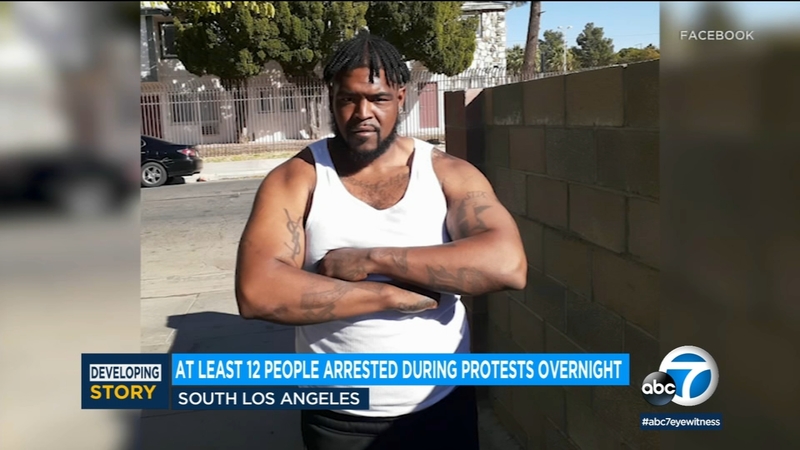 SOUTH LOS ANGELES (KABC) -- At least a dozen people were arrested and an unlawful assembly was declared as protests continued outside the South Los Angeles sheriff's station over the deadly deputy-involved shooting of Dijon Kizzee.

Protesters gathered Sunday night outside the station, roughly one week since Kizzee was shot multiple times by deputies.

Authorities said protesters threw chunks of concrete, bricks and rocks, and launched mortars at deputies. No injuries to protesters or deputies during Sunday's demonstration were reported.

LASD also said there were no arrests or injuries during a protest held Saturday.

One video from over the weekend showed the moment a flash-bang exploded in front of a local photographer.

Kizzee was stopped last Monday in the Westmont area for an alleged vehicle code violation while riding a bicycle, according to the L.A. County Sheriff's Department.

After he was stopped, Kizzee allegedly tried to run away.

"Our suspect was holding some items of clothing in his hands, punched one of the officers in the face and dropped items in his hands,'' Lt. Brandon Dean said last week.

"The deputies noticed that inside the clothing items that he dropped was a black, semiautomatic handgun, at which time a deputy-involved-shooting occurred.''

The sheriff's department has said he "made a motion toward the firearm.''