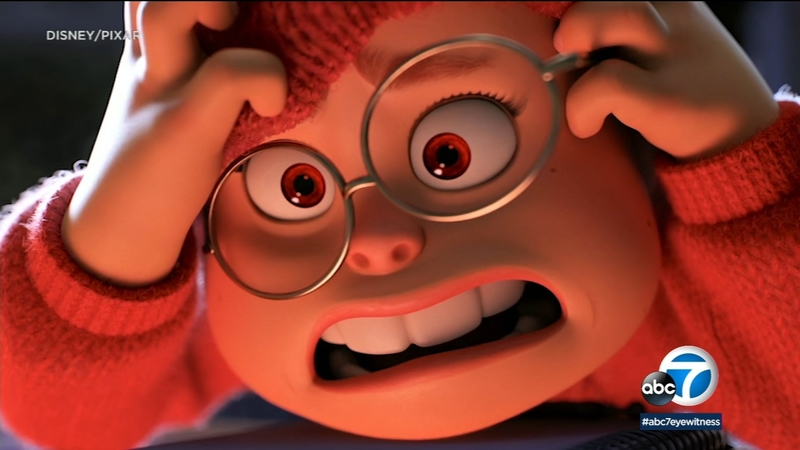 HOLLYWOOD (KABC) -- The latest animated film from Disney-Pixar takes you back to those awkward teenage years.

"Turning Red" is about a 13-year-old girl named Meilin who's dealing with the ups and downs of being a teenager, but she suddenly has one more thing to deal with in life.

Whenever she gets too excited, she suddenly turns into a giant red panda. It's due to an ancient "mystical connection" her family has with the animal.

Star Rosalie Chiang, who plays both the girl and the red panda, said the movie captured young teenagers just right.

"I think Domee Shi, the director, and the rest of Pixar, did a great job of just recreating kind of a 13-year-old, middle school scene where everyone, even the people who are supposedly making fun of me, are awkward and awkward-looking," Chiang said.

"It really taps into that awkward time in all of our lives. Everyone goes through it and you will survive and thrive." Watch Director, Domee Shi, filmmakers, and voice talent give a glimpse into the characters and movie. pic.twitter.com/tTvkE9lxNW

At 16, Chiang has outgrown the awkward phase, but it actually came in handy to play the part.

"I just remembered, like, four years ago when she was 12, and she came into Pixar for the first time with her cute little backpack, and she's so, like, awkward and sweet," Shi said. "Seeing her become, like, a young woman, I was, like, 'Oh my gosh.'"

Sandra Oh plays Meilin's overprotective mom. She is very happy to see the movie take place in the land where she was born: Canada.

"I think it's the first one that's set in Toronto. So, as a Canadian having lived in Toronto, I'm very, very proud of that," Oh said. "There are a lot of Easter eggs there for those who are Canadian."

In the years it took to complete "Turning Red," producer Lindsey Collins said it was screened and tweaked several times to get it just right.

"It's nerve-wracking because you're living with a broken version of your film for about three and a half years," she said, "You have to get comfortable with that, which most artists are not."