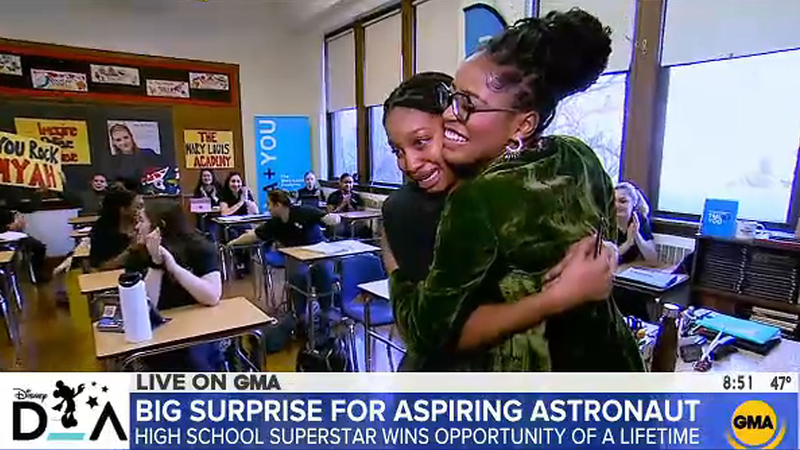 QUEENS, New York -- A teenager from New York City who aspires to be an astronaut is the latest student to be honored with "the opportunity of a lifetime" by The Walt Disney Company.

Myah Mitchell, a student at The Mary Louis Academy in Queens, has been accepted into Disney Dreamers Academy.

The presentation included a videotaped message of congratulations from one of Mitchell's idols, Dr. Mae Jemison, who was the first African-American woman in space.

Mitchell is a robotics team member, a musician and a compassionate volunteer for many charities. She aspires to be an astronaut, but admits others have tried to limit her dreams.

"People have told me my dream is too ambitious. Being black, being female... people have said to me, that's not for you," she said.

Filled with emotions and tears, Mitchell called it "awesome," while surrounded by her classmates.

Her principal called her deserving.

"She is a musician, robotics team member, started the girls with code program here, she volunteers with vets, mentors young children every Saturday," Principal Ann O'Hagan-Cordes said. "Myah is going to soar to great heights, literally or metaphorically!"

It is hosted by The Walt Disney Company, entertainer Steve Harvey and ESSENCE magazine.

The Dreamers get to interact with Disney Cast Members, celebrities, industry experts and community leaders through inspirational talks, immersive career activities and a networking and interviewing experience.

Dreamers also get to enjoy the fun of Walt Disney World theme park and explore the magic behind the scenes as well.

For more information on the program- - and how all teenagers can apply -- visit the Disney Dreamers Academy website.