"It's amazing to me why we keep loving this country and this country does not love us back," Clippers coach Doc Rivers made emotional comments about racial justice and the shooting of Jacob Blake in Wisconsin.
KABC
By Rachel Brown 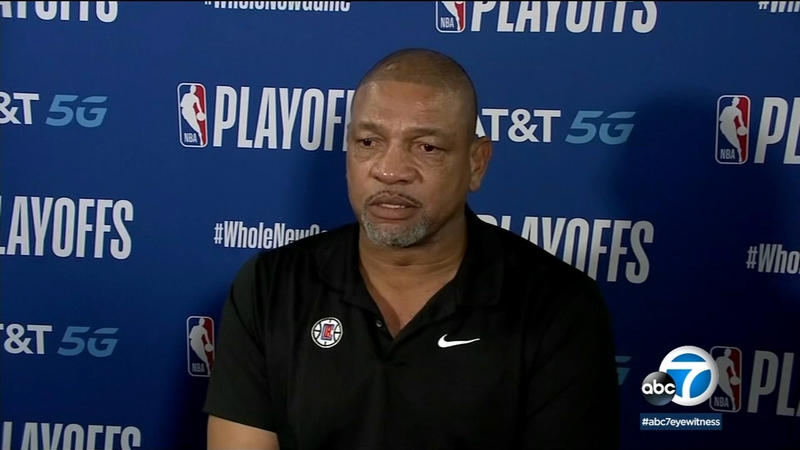 ORLANDO, Fla. (KABC) -- Los Angeles Clippers coach Doc Rivers made some emotional comments Tuesday about the shooting of Jacob Blake in Kenosha, Wisconsin, as well as the general ongoing racial strife in this country.

Rivers, who was at times fighting back tears, said he wishes he could just be a coach, but he is too often reminded of the color of his skin.

Rivers spoke at length about how disturbing it was to watch the video of Blake being shot.

"That video, if you watch that video, you don't need to be Black to be outraged," Rivers said. "You need to be American and outraged. How dare the Republicans talk about fear. We're the ones that need to be scared. We're the ones having to talk to every Black child. What white father has to give his son a talk about being careful if you get pulled over?
The coach, speaking in a postgame interview following the Clippers' win over the Dallas Mavericks in the first round of the playoffs in the NBA bubble in Orlando, grew emotional as he continued to talk about the hot-button issue.

"We've been hung, we've been shot. And all you do is keep hearing about fear. It's amazing to me why we keep loving this country and this country does not love us back."

The shooting of Blake, whose father said he is paralyzed from the waist down, has sparked protests nationwide, including in Los Angeles where dozens gathered for a second night Tuesday.


The protest came after demonstrators on Monday night marched to Los Angeles police headquarters. The protest turned chaotic late at night and police declared the gathering an unlawful assembly as a protesters were seen tearing down a barricade. Police could also be seen scuffling with protesters.

No arrests or injuries from Tuesday's protest were immediately reported.

Rivers said his father was a police officer, and he believes in "good cops" but is calling for changes to police departments across the country.

RELATED: LeBron James speaks out after Wisconsin police shooting: 'We are scared as Black people'

Lakers star LeBron James and other NBA players continue to call for reform.

"We play a beautiful game which brings so many families together, and people being able to rejoice and enjoy it," James added. "But at the same time, never losing track of what's really going on in our world, especially here in America. My prayers go to their family, and hopefully we can have some change."

In response to Blake's shooting, the Toronato Raptors have discussed potentially boycotting Thursday's game against the Boston Celtics.