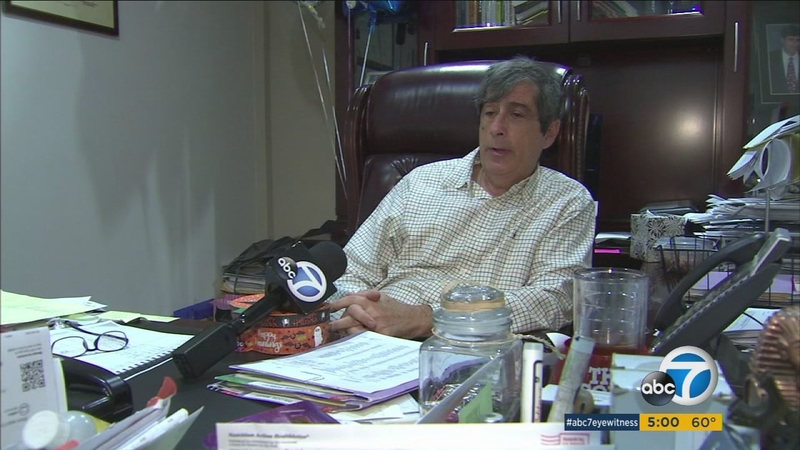 Dr. Michael Howard Popkin, 68, was facing one count of sexual exploitation of a patient and three counts of sexual battery, according to a statement from the Los Angeles Police Department, whose detectives took the surgeon into custody last week.

The alleged crimes occurred in Popkin's office in the 5300 block of Balboa Boulevard between 2001 and 2016, according investigators.

Two women have reported incidents that are said to have taken place in 2014 and 2016.

One of the women spoke to reporters Tuesday morning. Asked if she ever questioned whether she wanted to step forward, she replied: "At the very beginning? Yes. But once I started, I was angry, and this is my way of venting out what I need to vent out. Because this is just not right."

Detective Edward Moreno was among the LAPD officials who stood alongside the alleged victim during her remarks.

"A doctor is looked upon as being a person with a special skill, so a lot of people can't believe, 'Hey, can a doctor do this?'" Moreno said. "A doctor's a regular person."

The suspect has been licensed to practice medicine in California since 1977. In light of his lengthy career and "multiple allegations of sexually assault by several different victims," the news release said, police believe other possible assaults may have gone unreported.

"I recognize the difficulty for many sex crimes victims reluctant to report what happened to them," said Detective Ninette Toosbury, "especially if the perpetrator is in a position of trust, like a doctor, and a respected member of the community."

Popkin posted bail after his arrest last week and was back at work on Tuesday.

"I can honestly say that, I just turned 68, and I never dreamed that I would have any legal issues like this," he told ABC7. "I will do whatever I can to defend myself and protect my reputation and prove to my family and friends I am innocent."