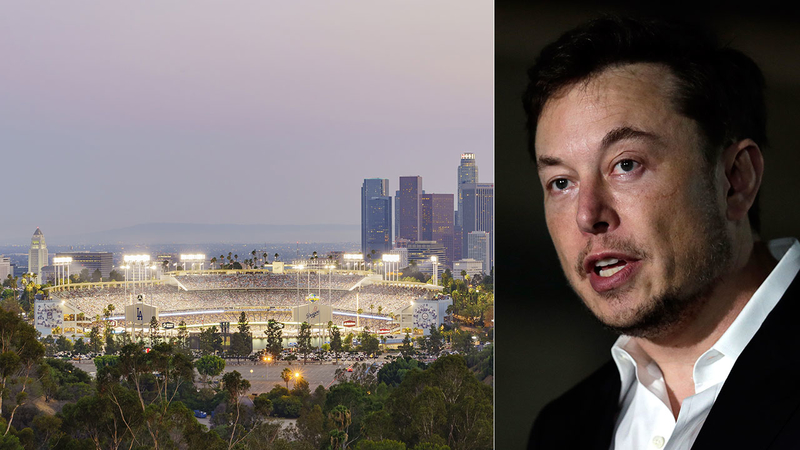 The company announced its Dugout Loop proposal Wednesday, saying it would be a "zero-emissions, high-speed, underground public transportation system" that would bring fans from neighborhoods west of downtown to the stadium in four minutes.

The starting point for the tunnel hasn't been determined yet, but there are three options on the table, all of them near Metro Red Line stations - Vermont/Sunset, Vermont/Santa Monica or Vermont/Beverly.

If approved by the various government agencies that have to review the project, construction of the tunnel would take about 14 months, the company estimates.

While the aim is to reduce traffic and parking issues around Elysian Park, the system would only carry a small fraction of the fans that attend the average Dodgers game.

Initially the system would carry just 1,400 people per event - or about 2.5 percent of the average Dodger Stadium crowd. That could eventually expand to 2,800 per game.

The system consists of "autonomous electric skates" that would travel underground at speeds around 125-150 mph, with each skate holding 8-16 passengers.

Fares would be around $1 and tickets could be purchased in advance.

Dodger fans Wednesday night said they were excited to hear about the idea, with many expressing frustration over the traffic they dealt with to get to the evening's game.

Mayor Eric Garcetti and the Dodgers both offered praise for the idea.

"Always exciting to see innovative ideas like the proposed Dugout Loop to @Dodgers Stadium that could help ease congestion on our roads and make our most iconic destinations more accessible to everyone," Garcetti tweeted.

Always exciting to see innovative ideas like the proposed Dugout Loop to @Dodgers Stadium that could help ease congestion on our roads and make our most iconic destinations more accessible to everyone. https://t.co/vleQtpUqnt

Dodgers CFO Tucker Kain issued a statement about the plan: "We were excited when the Boring Company came to us with this project. Whether it is flying overhead in an aerial transit system or bypassing traffic through an underground tunnel, we are always looking for innovative ways to make it easier for Dodgers fans to get to a game. We are committed to working with our neighbors and fans as the project moves forward."