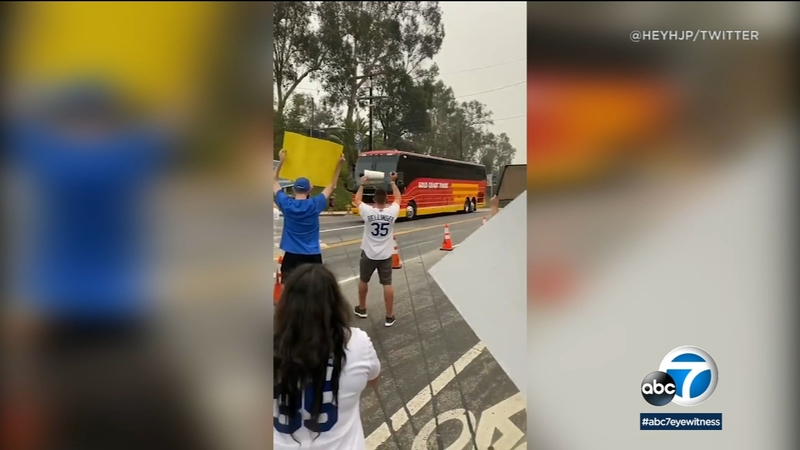 LOS ANGELES (KABC) -- Ahead of Saturday afternoon's game between the Dodgers and Astros at Chavez Ravine, a group of fans of the Boys in Blue greeted the Houston team with an ongoing reminder of its 2017 misdeeds.

"L.A. people, if you want to boo the Astros team bus before the game tomorrow," a Twitter account named "2020 Astros Shame Tour" said, "a group is meeting at the Vin Scully/Stadium Way entrance" at 11:30 a.m.

A group of dedicated fans stood outside the main gate Saturday and protested the Astros bus as they made their way into the stadium.

Later in the afternoon, the Los Angeles Times reported, a plane was set to fly over Dodger Stadium with a banner that read "ASTROS CHEATED. NEVER FORGET. GO DODGERS!"

The flyover was pending favorable visibility conditions at 3:30 p.m. and 4:50 p.m., according to the newspaper, and is scheduled to be repeated before Sunday's game.

The banner on Sunday will say "STEAL THIS SIGN, ASTROS," according to David Yontz, who created a GoFundMe page for that day's display.
EMBED More News Videos

Dodgers reliever Joe Kelly received an eight-game suspension from Major League Baseball for his role in a benches-clearing confrontation in Houston.

"Do your part in showing the Trashtros just how much you hate them," Yontz said in a statement on the fundraising website. "If I collect more than $850, I will donate the remaining amount to Dodgers-associated charities."

As of Saturday afternoon, $949 had been raised.

Tempers flared in Houston in late July when the teams met for the first time since an MLB investigation revealed the Astros had cheated by using a camera-based sign-stealing system during their 2017 championship run. That run culminated in a World Series victory for the Astros in seven games over the Dodgers.

A mural has popped up in Silver Lake in honor of Dodgers reliever Joe Kelly's pouty face that he made during a game against the Houston Astros earlier this season.

During a two-game sweep by L.A., hard-throwing reliever Joe Kelly tossed a pitch in the area of Bregman's head and taunted shortstop Carlos Correa after striking him out, prompting both benches to clear. Kelly later received an eight-game suspension for his actions, reduced to five games on appeal.

Kelly's pouty expression, directed at Correa, has since been immortalized in a mural in Silver Lake, a few miles from Dodger Stadium.

LA people, if you want to boo the Astros team bus before the game tomorrow:

A group is meeting at the Vin Scully/Stadium Way entrance, 11:30am