The Dodgers advanced to the NLDS after a 3-0 win over the Milwaukee Brewers in Game 2 of the wild-card series.
AP 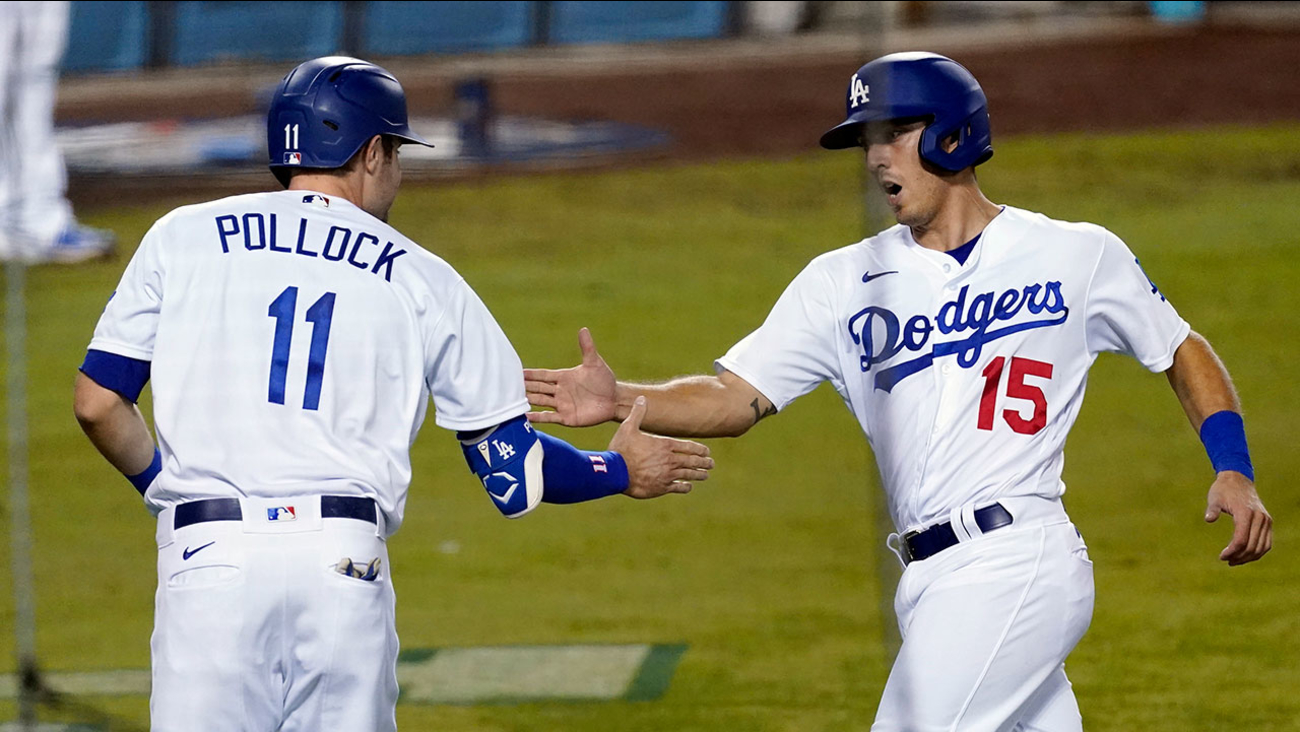 Dodgers' A.J. Pollock (11) and Austin Barnes (15) shake hands after they scored during the fifth inning in Game 2 of the wild-card series against the Milwaukee Brewers on Oct. 1. (AP Photo/Ashley Landis)

LOS ANGELES -- Clayton Kershaw struck out 13 while delivering eight innings of three-hit ball, Mookie Betts snapped a scoreless tie with a two-out, two-run double in the fifth, and the Los Angeles Dodgers beat the Milwaukee Brewers 3-0 to sweep their NL wild-card series on Thursday night.

The eight-time West champion Dodgers advanced to the NL Division Series in Arlington, Texas, and will play either the St. Louis Cardinals or San Diego Padres, who meet in a deciding Game 3 on Friday.

Kershaw's strikeouts were a playoff career high and the most by a Dodgers pitcher in the postseason since his mentor Sandy Koufax had 15 in Game 1 of the 1963 World Series against the Yankees. Kershaw issued his lone walk to Luis Urias in the eighth and promptly picked him off when a diving Urias couldn't get back to the bag. The Brewers lost their challenge of the call.

Kershaw, a three-time NL Cy Young Award winner, showed none of the fallibility that's plagued his postseason career. He came in with a 9-11 record and 4.43 ERA in the playoffs.

He had his way with the beleaguered Brewers. He gave up singles to Jedd Gyorko, Urias and Keston Hiura.

Neither team managed to hit a ball hard as Brandon Woodruff and Kershaw dueled through four innings. Only two of the Dodgers' nine hitters didn't strike out during that span; five of the Brewers didn't.

Los Angeles managed just one hit through four innings, a single by Austin Barnes, before breaking out in the fifth.

Cody Bellinger and Chris Taylor had back-to-back singles up the middle with one out. AJ Pollock grounded into a fielder's choice to third and Urias stepped on the bag to force Bellinger and fired to first. But Gyorko couldn't handle the throw in time to complete the double play.

Barnes singled with two outs to set up Betts, who doubled sharply down the third-base line. The ball rolled into the left-field corner and three runs scored to chase Woodruff.

Woodruff allowed three runs and five hits in 4 2/3 innings. The right-hander struck out nine against no walks. As he was leaving the game, Woodruff shouted expletives and gestured angrily in the direction of plate umpire Quinn Wolcott, who tossed him.

Brusdar Graterol pitched the ninth to earn the save for the Dodgers, with veteran closer Kenley Jansen watching from the bullpen. Graterol allowed a single, the Brewers' fourth hit of the game.

As if the Brewers didn't have enough injuries already, catcher Jacob Nottingham got hurt and left the game in the sixth.

Slugger Ryan Braun sat out the game with a strained oblique that he originally injured last weekend and re-aggravated crashing into the right field wall in a 4-2 loss in Game 1 on Wednesday. Milwaukee played the series without its top pitcher Corbin Burnes and top reliever Devin Williams, who are both hurt.
Report a correction or typo
Related topics:
sportslos angeleslos angeles countymlbmilwaukee brewerslos angeles dodgers
Copyright © 2020 by The Associated Press. All Rights Reserved.
More Videos
From CNN Newsource affiliates
TOP STORIES