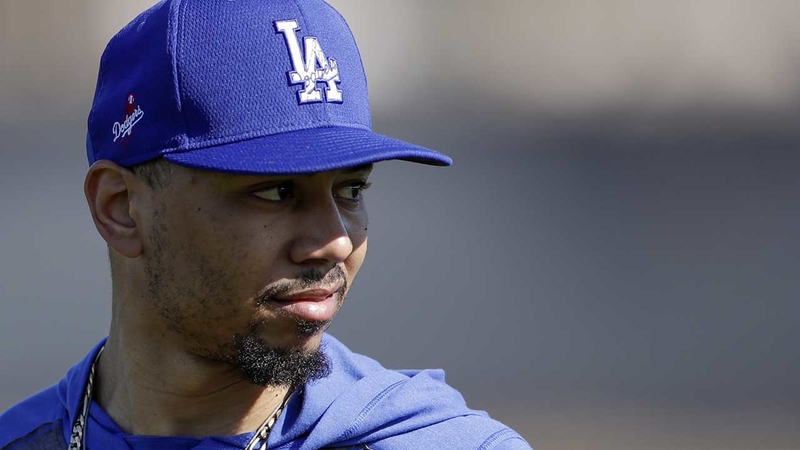 The Dodgers officially acquired Betts on Monday night, as well as Price, and cash from the Red Sox for three young prospects.

Betts was a member of the Boston Red Sox team that defeated the Dodgers in the 2018 World Series.

The Red Sox are presently being investigated by Major League Baseball for stealing signs from opposing teams during the 2018 season and the post season.

Andrew Friedman, Dodger president of baseball operations, and Dodger manager Dave Roberts were also in attendance at the news conference at Dodger Stadium.

On Monday, Red Sox chief baseball officer Chaim Bloom addressed the blockbuster trade of Betts and Price to the Dodgers, saying that the trade of the star outfielder and pitcher represented the best move for the franchise in "the big picture."

Sources told ESPN that a deal had been agreed upon to send the players to the Los Angeles Dodgers for a package that includes outfielder Alex Verdugo, shortstop Jeter Downs and catcher Connor Wong going to the Boston Red Sox.

A blockbuster three-team deal was agreed upon about a week ago. Betts and Price were going to the Dodgers for Verdugo and Minnesota Twins pitching prospect Brusdar Graterol. Dodgers starter Kenta Maeda was headed to the Twins.

But the Red Sox, as first reported by The Athletic and confirmed by ESPN, were spooked by a medical review of Graterol, a hard-throwing, 21-year-old right-hander who has undergone Tommy John surgery and missed time in 2019 because of a shoulder injury.

The reworked deal still had Betts and Price going to Los Angeles. The Red Sox, sources said, agreed to pay half of the $96 million left on Price's deal.